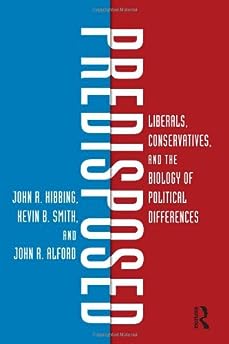 This time I take on Predisposed: Liberals, Conservatives, and the Biology of Political Differences by three American political scientists not previously known to me.

Drawing on a mass of work in experimental psychology, neurophysiology, and even—gasp!—genetics, they show us that: “At least at the far ends of the ideological spectrum, liberals and conservatives are emotionally, preferentially, psychologically, and biologically distinct.”

The Amazon description makes the book sound a bit Malcolm Gladwell-ish, but it’s way more rigorous and less gene-shy than Gladwell’s stuff.  Not, I’m sure, that the authors would have any objection to Gladwell-level book sales.

Read my review at The American Spectator.

There is an excellent selection of Pi Day gifts for the math geek of your affections at mathematicianspictures.com.

I particularly recommend their posters—they come in different colors—showing the first million digits in the decimal expansion of pi.  The posters are rather big—four feet by eight—but if you have an appropriate stretch of wall they make a great conversation piece.  It’s useful, too, as a reality hook, to have a reminder to hand of what a million of anything actually looks like.

(I got one of these posters for my daughter when she was at high school, and offered to bring it in and present it to her class.  She:  “Dad, if you do that, I shall kill you.”  De gustibus …)