On Tuesday, the House Committee on Homeland Security held a hearing titled, Hearing: Dangerous Passage: The Growing Problem of Unaccompanied Children Crossing the Border in which the chaos was discussed with DHS Secretary Jeh Johnson and a couple other officials. 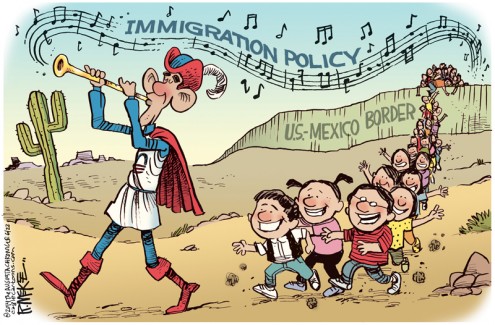 Rep. Candice Miller thought that economic sanctions should be taken against the Central American sending nations rather than giving them $250 million in aid as Obama has done, which will just be stolen.

“I think we need to stop foreign aid to Centrals immediately,” she declared.

Miller’s press release repeated the points made in the hearing, including her suggestions for actions to be taken:

WASHINGTON – Today, after the Homeland Security Committee hearing on the unprecedented number of unaccompanied children crossing the southern border, U.S. Representative Candice Miller (MI-10), Vice Chair of the House Homeland Security Committee and Chairman of the Subcommittee on Border and Maritime Security, issued the following statement calling for the U.S. to stop sending aid to Central America and Mexico until they agree to help with efforts to stop this humanitarian crisis:

“Unfortunately, Central America has had a long history of bad economies and violence. Both of these things are probably as bad now as they have ever been, but to say that’s the reason we suddenly have tens of thousands of children almost entirely coming from Guatemala, Honduras and El Salvador, traveling thousands of miles all the way up Mexico and then illegally entering the U.S., simply isn’t true.

“This humanitarian crisis can be laid directly at the feet of President Obama as a result of his Deferred Action for Childhood Arrivals policy of 2012 and tone deaf messaging fueling the misconception that these illegally-smuggled children will be allowed to stay.

“A number of other Members of Congress have subsequently joined me in this call for the National Guard, and last week, both Texas Governor Rick Perry and House Speaker John Boehner also asked the President to call up the Guard.

“I also called on the Administration to begin an aggressive public relations campaign in the Centrals to tell parents not to put their children in danger of paying Mexican drug cartels up to $8,000 a head to smuggle their children into the U.S.

“Mexico is our neighbor and our partner in trade, but they are behaving badly and dishonorably as they are not just complicit, but profiting from this human smuggling from the Centrals. We need to take some steps to protect America by getting our neighbor’s attention. Instead of increasing funding by hundreds of millions, as the President has called for, we need to stop foreign aid to the Centrals – immediately.

“Examples of what our USAID is being used for in the Centrals include helping civil society programs, climate change, and addressing the gender gap in education and the workforce. We’d be better off spending this money in the inner cities of America. We can start with Detroit.

“No more money from America until they step up their own responsibilities and stop their citizens from illegally migrating to the U.S.

“Regarding Mexico, how can we continue to have free and fair trade with a country that not only takes our own money, but also profits from the human smuggling of children? It is sickening to all compassionate people to watch videos of children riding on top of trains – the so-called “beast” – openly traveling thousands of miles through Mexico, and the Mexican government does nothing.

“We need to act decisively. We need to act now. No more financial assistance from the U.S. to the Centrals that are shipping their children here illegally, and we should reopen, reexamine, and perhaps repeal trade preference agreements, especially NAFTA and CAFTA. They need to understand that we are not going to sit idly by as they keep taking our money. We are not an ATM machine, and we can’t just sit here while this humanitarian crisis is worsening, endangering innocent children.”