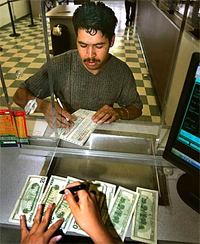 If there is one thing that annoys Mexicans, it is America standing up for its own sovereignty. Mexico, after all, has largely turned itself into a parasite state, mooching off the wealthy Uncle Sucker next door with Washington’s help.

In particular, Mexico depends on receiving billions of dollars from remittances sent by its exported people. Even though the amount is down with the rest of the economy, in 2009 Mexico got $21.18 billion in remittances. Talk about easy money!

Plus, it is quite advantageous to Mexican elites that they can get rid of their uneducated millions by scooting them north. The Mexicans understand that the worse they run their country, the more poor will flee to America and send back billions of dollars in remittances. For rich and powerful Mexicans, it’s a great scam. It’s not so good for us though.

A recent kerfuffle blew up in Mexico City because Oklahoma levied a minuscule tax on wire transfers in order to get a little power over drug money and remittances. The Mexicans are squealing because a few dollars ($3.9 million) are diverted from heading south.

Incidentally, this item caught me eye because I suggested in a 2002 opinion piece in the Washington Times that the government should tax remittances as a way to lean on immigration (Should immigrants be taxed?). The idea follows the simple dictum that taxing an activity tends to reduce it. See also several blog posts about taxing remittances in Vdare.com

A member of Mexico’s congress is asking the Mexican government to stop buying products from Oklahoma as a protest to a 2009 law that puts fees on wired money transfers.

Ildefonso Guajardo, a member of the Mexican House of Representatives, is protesting a law that went into effect July 1 that imposes fees on money transfers sent from businesses like Western Union.

In a resolution unanimously approved by the Mexican House of Representatives in Mexico City, the legislative body is asking its government to present a formal complaint to the U.S. government. The measure also directs its foreign ministry office to ask for mediation with Oklahoma’s governor to remove the fee. The Mexican Congress also asks its government to suspend all purchases of products originating in Oklahoma and other states considering similar legislation.

Mexico is the second largest export market for Oklahoma goods. In 2009, the state exported about $527 million worth of goods to Mexico, according to the state Commerce Department.

Guajardo, a representative from the border state of Nuevo Leon, said the state fee hurts families in Mexico who rely heavily on money sent home from relatives working in the United States.

The Oklahoma law says companies that wire money must collect a $5 fee for each transaction. For amounts over $500, the companies must collect 1 percent of the amount. The transfer fee amounts can be deducted from state tax returns.

“Five dollars might not seem like a lot, but when you make $2 a day it is,” said Guajardo in a phone interview with The Oklahoman on Friday. “That could pay for three kilos of eggs, or seven kilograms of tortillas.”

Rep. Randy Terrill, R-Moore, and Sen. Anthony Sykes, R-Moore, wrote the legislation that Gov. Brad Henry signed into law in June. Fees aren’t assessed on money transfers from banks, according to the law. Collected fees are deposited into a revolving fund for the Oklahoma Bureau of Narcotics and Dangerous Drugs. Since the bill became law, it has generated $3.9 million, according to the Oklahoma Tax Commission, which processes the fees.

OKLAHOMA CITY (April 9, 2010) – In response to the Mexican government’s efforts to “bully” the people of Oklahoma through a trade war, state Rep. Randy Terrill today called for imposing “much tougher sanctions on illegal aliens.”

“This represents an attempt by a foreign nation to interfere with the sovereign actions of a U.S. state,” said Terrill, R-Moore. “We clearly not only have the right, but the responsibility to legislate for the public health, safety, morals and welfare of our citizens – not theirs.

“The Mexican government should know that the people of Oklahoma will not be bullied or intimidated by anyone, anywhere.”

This week the Mexican House of Representatives passed a resolution denouncing U.S. states that impose remittance taxes and calling upon the Mexican government to take trade measures against those states.

The resolution specifically targets Oklahoma, saying remittance legislation enacted in this state is an “immoral, abusive and harmful” act against “immigrants’ rights.”

You can send Randy a note of appreciation for his efforts to protect citizens: randyterrill@okhouse.gov