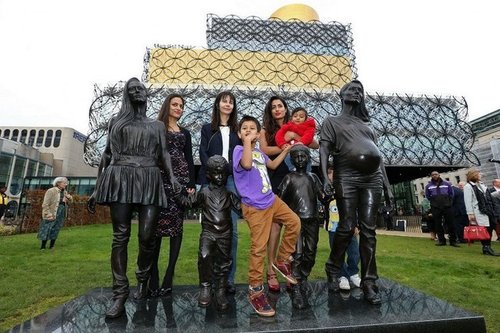 Two sisters and their sons are joining the likes of Queen Victoria, Matthew Boulton and Tony Hancock in being immortalised by a statue in Birmingham.

A Real Birmingham Family, a life-sized bronze sculpture featuring sisters Roma and Emma Jones, with sons Kyan and Shaye, is being unveiled today.

The statue has been created by Turner Prize-winning artist Gillian Wearing and came after the subjects were chosen out of 372 families who applied.

It occupies a prominent place outside the new Library of Birmingham and came about after the Ikon Gallery raised £150,000 and scoured the city for the right family.

Instead, they decided to honor a couple of hot babe sisters whose main accomplishment is getting themselves pregnant out of wedlock, because what says Cool Britannia more than single mums? Roma and Emma look like real scholars.

The project aimed to challenge the notion of what constituted a “real family” today and represent Birmingham’s cultural diversity.

In a statement after they were chosen as the subjects of the sculpture, the Joneses said: “Being mixed race, we feel at home here as it’s so diverse and multicultural.

Uh-oh … Speaking of libraries, here’s John Updike on the education-orientation of the Roma.

“As a result, we believe the mixed-race population in Brum will only increase. We feel truly amazed and honoured to be chosen to represent what it means to be a family in Birmingham.” …

Ms Wearing won the Turner Prize in 1997 for video 60 minutes of Silence, where a group of actors were dressed in police uniforms and had to stand still for an hour.

Ever since Dave Barry retired from writing his weekly column, I haven’t been keeping up with the Turner Prize as much as I should. I’m sure J.M.W. Turner, the prodigious English painter who anticipated Impressionism by a generation, would be impressed by “a group of actors [who] were dressed in police uniforms and had to stand still for an hour.”