In April, the Madison Wisconsin school board voted to name an elementary school after controversial Hmong warlord and political boss Vang Pao. Though worshipped as a god by the Hmong community exiled in America, General Pao was indicted recently with several others for plotting to overthrow the Laos government.

Didn't General Pao know that it violates the Neutrality Act for "Americans" to work for the overthrow of a recognized state? Naturally the Hmong are miffed about what they consider a betrayal from the US government that the rule of law could be used against their special leader. In previous criminal cases, like that of mass murderer Chai Vang, Hmong have not indicated much respect for the idea of equal justice under the law.

Also, it's news to me that Hmong consider themselves to be "exiles." Why then are we spending millions of taxpayer dollars to resettle them as refugees? Oh, and they are apparently a "diaspora" too. 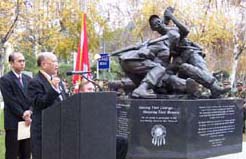 The photo shows Vang Pao at the Hmong war memorial in Fresno. Who knew?

Back to the school fracas...

The decision to name the school after Vang Pao was controversial from the beginning because of stories linking the leader to the CIA's secret campaign in Laos, the heroin trade and summary executions. [Whats in a name? Madison Hmong community wonders, hopes LaCrosse Tribune 6/10/07]

To clarify, the decision was controversial among Americans. No Hmong objected. They all want a school named after Vang Pao because "It would give a sense of pride to these young Hmong students," according to ethnic consultant Peng Her.

It's another nail in the coffin of assimilation of course to allow these tribal people to set up their own separate cultures within America on the taxpayers' tab.

Furthermore, Vang Pao was up to his eyeballs in drug trafficking and other money-making schemes. A tireless extortionist, he scammed money from old Hmong women so he could continue his millionaire warlord lifestyle here in the United States.

The Madison School Board is scheduled to meet on June 18 to debate the possible removal of Vang Pao name from the elementary school which continues to be under construction.