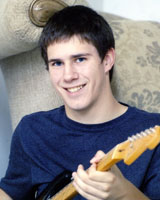 You can't call it justice when a drunk-driving illegal alien gets a sentence of just 15 years for killing a teenager, Paul Watry of Port Washington, Wisconsin, who had his whole life ahead of him.

The killer, Eddie Carbajal-Lile, ran a stop sign after drinking and struck a car with three young people inside. He fled the scene and was caught two weeks later in Ohio after he was arrested for harassing a bartender.

Fifty friends and family of Paul Watry were present for the sentencing on Monday.

Larry Watry, 50, Watry's father, told the judge the family would like an 18-year sentence, but also suggested that Carbajal-Lile should face 60 years behind bars, to match his son's life expectancy.

"Today does nothing for us. We've lost our son, and nothing can change that, and nothing will erase the time we had together," a tearful Watry told reporters after the hearing. "He was a remarkable young man."

During the hearing, Watry spoke passionately about his son for about five minutes, and then played an emotional 10-minute video montage of Paul Watry's life, with a portion of the musical backdrop performed by Paul, who owned eight guitars and headed a rock band called Ubiquitous Scab. [Illegal immigrant gets 15 years for fatal hit-run, Fond du Lac Reporter, May 20 2008]

The video tribute to the dead young man is a moving reminder of the human cost of open borders.