This item is from New Mexico and involves a state legislator, in a group email, warning fellow Democrat legislators and other officials against "Democratic Anglo Newcomer Opponents":

All Frank Otero wanted was a little help getting the word out about his campaign. After meeting with Rep. Miguel Garcia, D-Albuquerque, at a political event, Garcia reached out. “We talked on the phone he said he really wanted to help me and help my campaign,” Otero said. 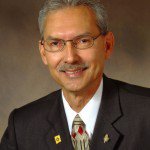 "A minority of unsuspecting Democratic leaders are supporting the Democratic Anglo newcomer opponents in Andrew’s and Frank’s primary races. Anglo Democrats with egos as big as Texas, mouths as big as the Grand Canyon, and much 'green' [moolah] from the East and the West Coast."

Garcia’s money reference appears to be more to Smith de Cherif, who has raised more than $10,000 of her campaign funds from out of state per finance records posted online.

Otero immediately condemned Garcia’s racial comments against his opponent Tuesday.“I just don’t believe in that,” Otero said. “My grandmother was half-Hispanic and half-Anglo. Some of those comments are offensive even to my family.”“Those kind of comments just don’t fly in any capacity.”

The remarks also caught the attention of House Speaker Ken Martinez, D-Grants, who says he’ll have a talk with Garcia. “I just have to tell you I’m a little troubled by it and it really doesn’t reflect House Democratic values,” Martinez said in a phone interview. “I just don’t like race to raise its head as one of the issues you should vote one way or the other.”

Garcia declined to answer questions on his comments in the email or back off.  “I did not send the email to the media,” Garcia wrote in a text message. “I have nothing to share regarding my email seeking support for two outstanding candidates.”

At first, Garcia did not apologize for the email, sending a text to KRQE-TV that said, “I did not send the email to the media. I have nothing to share regarding my email seeking support for two outstanding candidates.”  But news of the email spread quickly across the state and, Wednesday afternoon, Garcia apologized for making “inappropriate comments.” [Hispanic lawmaker blasts 'Anglo Democrats,' then apologizes,  By Rob Nikolewski, Fox News, May 15, 2014.]