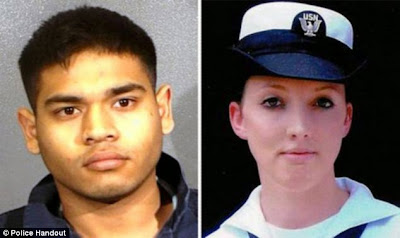 Thanks to reader-researcher “W,” who writes "We need to sign up more of them for the military-pathway to citizenship…"

Jorge Torrez, ex-Marine, sentenced to death on Friday for murdering a Navy sailor By The Associated Press May 30, 2014 - 4:36 a.m. WJLA

ALEXANDRIA, Va. (AP) - A federal judge has sentenced an ex-Marine to death for the 2009 murder of a Navy sailor at a barracks in northern Virginia.

Jorge Torrez of Zion, Illinois, was formally sentenced Friday afternoon in Alexandria, where last month he was convicted of murdering Amanda Snell at Joint Base Myer-Henderson Hall. Following the jury's verdict, the law gave Judge Liam O'Grady no choice but to sentence Torrez to death.

Torrez's lawyers say he will appeal.

After Torrez was convicted of Snell's murder, he ordered his attorneys to make no arguments on his behalf during the trial's sentencing phase.

The jury also found Torrez responsible for killing two girls in his hometown of Zion in 2005.

Letter
A Reader Wonders What We AREN'T Being Told About George Floyd
MORE...
POPULAR TAGS