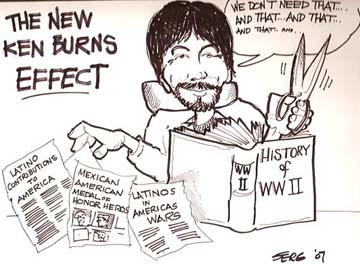 The complaints from Mexicans just keep on coming about Ken Burns' PBS World War Two documentary because the original did not pay unique attention to Hispanic veterans. As usual, the self-appointed representatives of their vets do not consider them to be American soldiers first, but a group apart who need to be glorified in a special way.

(The cartoon shown is from the pro-Mex comic strip website, Baldo, which has been flacking the issue.)

Listen to the NPR interview linked below to hear Angelo Falcon express a political motive for his campaign against Burns' artistic freedom. He asserts that Hispanics need to be seen "in a positive light... at a time when latinos are being attacked because of this horrible immigration debate." Honoring veterans is not his agenda.

Ken Burns acceded to the demands, but the protests have not stopped. Angelo Falcon found the added Hispanic segment shown thus far to be "excellent" but complained bitterly that the piece appeared tacked on. The film, which was six years in production, had been completed when the Hispanics demanded changes, but Falcon wanted perfect seamlessness along with the additional material. There is simply no satisfying these reconquista activists.

The larger goal is to rewrite history to exaggerate Hispanics' contributions to the history of America. Mexicans want us to forget that their invasion has been recent and rapid: Ken Burns observed that the Hispanic population during WWII was only 1.4 percent.

Filmmaker Ken Burns' new documentary The War recently debuted its first episode on PBS. Before its release, Burns was criticized by Latinos who said the film failed to acknowledge Latino contributions to the war. In response, Burns agreed to add new material. Still, some Latinos remain unimpressed. Angelo Falcon, of the National Institute for Latino Policy, and Lionel Sosa, a PBS board member, explain the lingering discontent. [Latino Group Holds Applause for 'The War' NPR 9/24/07]

In Harlingen Texas, a group demonstrated against the film on Friday.

"They left us out," veteran Maximo Belmarez said. "Mexicans played a big part of the war. It was not puros gueritos fighting." [Protesting 'The War', Brownsville Herald 9/21/07]

As I mentioned in Hispanic Historic Revision: WWII, all patriotic Americans honor those who served in the military during war. But this continuing controversy detracts from what should be an untroubled homage to aging veterans for the most unworthy of political aims, that of destroying America.