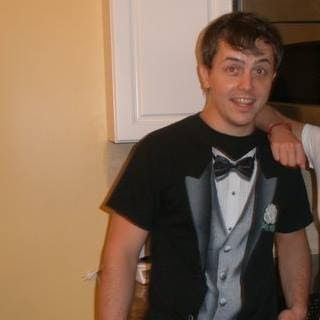 According to Facebook, the latest homicide victim in the 65 percent black city of Baltimore went by the name Robbie.

Robert Ponsi was 29 years old and until yesterday (January 9th), he lived as one of the white minority in the majority black city.

Today, he is dead.

Robert "Robbie" Ponsi: Murdered by two black teenagers (with police searching for more black suspects) as he rode his bike on a Saturday night in Baltimore

Antwan Eldridge and Daquan Middleton, 17 and 16 respectively, stabbed him to death as he rode on his bicycle.

Two black teenagers stabbed Robbie to death at roughly 9:00 p.m. on a Saturday night, though police in Baltimore are looking to identify more suspects (who will all turn out to be black males who may or may not have spent time at the Freddie Gray Youth Empowerment Center).

Inevitably, Ponsi's family will denounce anyone attempting to merely point out his murder was yet another black-on-white homicide in the city of Baltimore, for in their eyes a far worse crime than murder would have been committed if anyone developed a hint of racism over Robbie's murder.

One wonders if Robbie attended a memorial service for Kim Leto?

One wonders what went through Robbie's mind in his final, terrifying moments on earth. Perhaps he agreed with Marilyn Mosby when she indicted six Baltimore Police Officers and said, "I heard your cries of no justice, no peace"...

Perhaps he marched in solidarity with Black Lives Matter protesters in Baltimore, demanding justice in the name of the dead heroin dealer Freddie Gray...

But it doesn't matter now, does it?

For his final sentient moments on earth were knowing he was being robbed by multiple black males and that a knife was being thrust into his body multiple times on a random Saturday night in 65 percent black Baltimore. [Bicyclist, 29, stabbed to death during robbery in Waverly, Baltimore Sun, January 10, 2016]:

Robert Ponsi, 29, a server at a restaurant in Harbor East, was stabbed to death on his bicycle during a robbery in Waverly Saturday night, police said.

Officers were called at 9:10 p.m. and found Ponsi stabbed multiple times at Venable Avenue and Old York Road. He was pronounced dead just before 4 a.m. at Johns Hopkins Hospital.

Police have arrested two suspects in the attack: Antwan Eldridge, 17, of Ednor Gardens, and Daquan Middleton, 16, of Berea. Both are charged as adults with murder, armed robbery and assault, police said.

Homicide detectives are looking to identify other suspects. Anyone with information may call 410-396-2100 or Metro Crime Stoppers at 1-866-7LOCKUP.

Ponsi moved to Baltimore five years ago from Leesburg, Fla., where he was raised by his grandparents, his grandfather, Robert Ponsi, 72, said.

Known as "Robbie" to his family, he was the second-eldest of six children, and an athletic, strong-willed young man who had hoped to join the AmeriCorps or the Peace Corps, his grandfather said.

In Baltimore, Ponsi was a server at the James Joyce Pub in Harbor East, where his manager, Brian Myers, remembered him Sunday as a strong-willed, funny, "genuinely good guy."

"BikeMore has been coordinating and working closely with the Baltimore City Police Department to improve safety for bicyclists in that neighborhood for some time, and we will continue to work with police to ensure that the people that target bicyclists are arrested," Cornish said.

In reading the life and death of Robbie Ponsi in 65 percent black Baltimore, I'm reminded of the important in re-reading Robert Heinlein's Starship Troopers, particularly the lesson of History and Moral Philosophy portion of the book.

If Baltimore were 100 percent white, would there even be a need for Bikemore to exist or would free spirits like Robbie Ponsi be free to ride their bikes wherever they please without fear of being stabbed to death on a random Saturday night in the city?