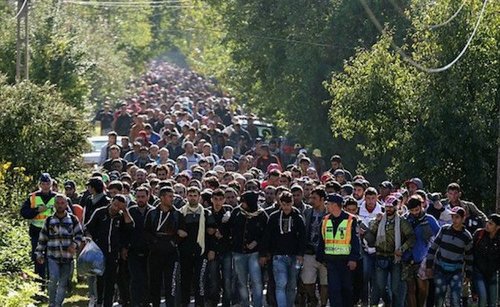 Hijrah to Europe: A Syrian Explains His Purpose for Relocating to Germany

According to the all-encompassing religio-political system known as Islam, a “Hijrah” is immigration with the intention of converting the population of the new country to that belief.

To emigrate in the cause of Allah – that is, to move to a new land in order to bring Islam there, is considered in Islam to be a highly meritorious act. “And whoever emigrates for the cause of Allah will find on the earth many locations and abundance,” says the Qur’an. “And whoever leaves his home as an emigrant to Allah and His Messenger and then death overtakes him, his reward has already become incumbent upon Allah. And Allah is ever Forgiving and Merciful.” (4:100) The exalted status of such emigrants led a British jihad group that won notoriety (and a shutdown by the government) a few years ago for celebrating 9/11 to call itself Al-Muhajiroun: The Emigrants.

Right on cue, a Syrian Muslim spills the beans about his big Islamic plans:

NARRATOR: For most of the refugees, Germany is their main destination. A majority of them flee from the war. Among them are some who have other reasons and goals.

SYRIAN MAN: My main goal for leaving Syria is… to lead people to the acceptance of Islam. If my wish comes true, I will gladly forgo the whole world. For this purpose I would not only sell Syria, but also… my parents, who are more valuable to me than Syria.

I swear by Allah, I only came here for this one goal. But this will be very demanding work for me. And for this reason, I have met with a few men and women who… want to know more about Islam.

I have observed that they are curious and willing… to get to know Islam through us. If someone would convert to Islam through me, whom I teach… so that in return he can bring others to Islam, then I would be one who received the tenet and passed it on and when he converts to Islam to then Islamize others… then I will be rewarded for my and for his work. In that case I do not want to go back to my home country, I only want to go up (into Paradise).

And what if the non-Muslims aren’t interested in joining up? What then, Achmed? Is forced conversion okay, as Islam scriptures suggest?