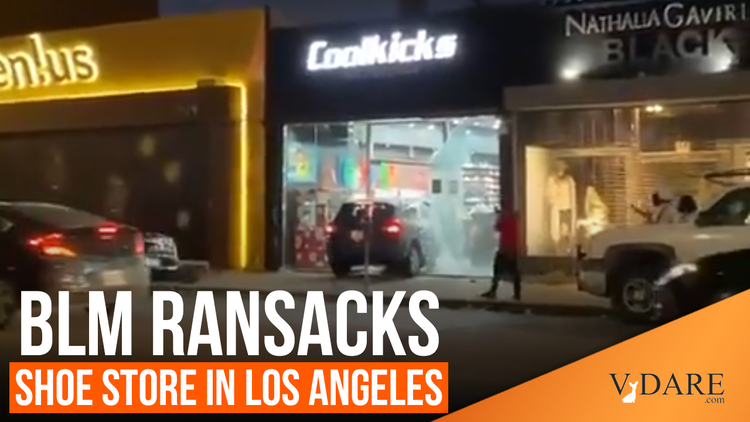 Here We Go Again ... Retail Mourning at a Shoe Store in West Hollywood

People in Los Angeles are already about to turn up in response to that police shooting of a Black man earlier..

This just happened on Melrose. pic.twitter.com/SD1LIY8ViE

The Los Angeles County Sheriffs shot somebody in South-Central, so now 10+ miles away, mourners are looting a shoe store on Melrose Boulevard (e.g., the old TV show Melrose Place), traditionally the most fashionable shopping street in West Hollywood.

Is this spreading in West Hollywood, or was this guy a Premature Mourner, to coin a phrase? (In case you are wondering about SoCal law enforcement minutiate, West Hollywood is policed by the County Sheriffs, who have their hands full in South-Central, rather than the LAPD.)

Update: So far, this hasn’t spread on Melrose like the Undocumented Shopping did at the end of May. It’s hard to engage in large-scale Retail Mourning without a Peaceful Protest nearby to distract the police.

From iSteve commenter Altai, here’s video of the late May looting of this same store:

From an LA Times article earlier this year of Cool Kicks:

A no-savings generation is cashing in sneaker collections

Those are some of the reasons why more and more sneaker collectors are cashing out the shoes they have lovingly amassed over the last decade or so.

Most were facing sudden expenses that threatened to throw their finances into disarray because student loans, rent payments, avocado toast and the like had pushed them into a cash-flow corner. …

CoolKicks, which opened on Melrose Avenue in 2016, has handled a raft of emergency sneaker collection sales, ending 2019 with $9 million in revenue, up about 30% from $6.9 million in 2018, said Adeel Shams, 28, who founded and owns the business with friends Davon Artis, 28, and Bereket Abraham, 33.

“I’ve literally heard every story in the book,” Shams said. “First reason for sure is bills, things like rent money. Second would be more personal reasons, someone’s brother or sister is in jail and they needed bail money. Another I’ve heard is emergency hospital bills. Another common one I have heard lately is that their girlfriend is pregnant.”

The sneakerhead population has also begun to age out in terms of interest, Shams said.

“There are collectors who have been doing this for over a decade, and they have come to a point where they think there is oversaturation and younger generations taking over,” Shams said. “The OGs, as we call them, they are at the age now where they are selling and just putting the money into something different.”

Shams is expecting revenue of $15 million this year. He and his partners have plans to open five to 10 more stores in major cities, including New York, Miami and Las Vegas, in the next three to five years.

CoolKicks encourages sneakerheads to bring in their collections directly to the store. But Shams will also do the occasional home visit, and he’s learned with almost geometric precision how to stuff dozens of shoe boxes into the relatively tight confines of his Maserati Ghibli, “leaving me just enough room to maneuver my steering wheel,” he quipped.

“We were chasing a dream and it was a huge risk,” Shams said. “It’s ended up becoming a big success for us.”