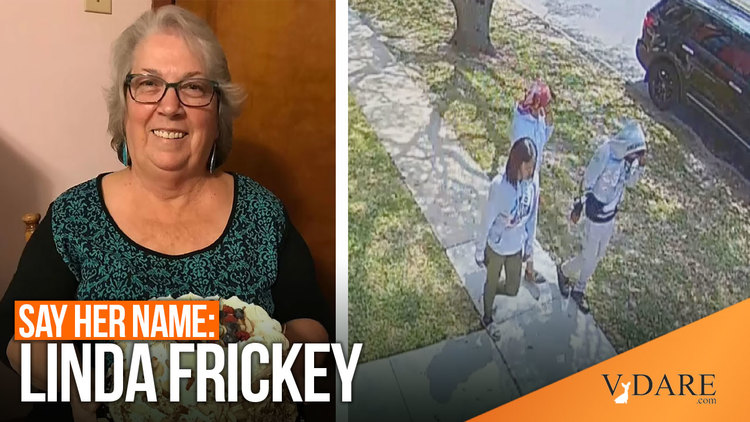 Earlier: Her Name Is Rosalie Cook: 80-Year-Old White Grandmother Murdered by Black Career Criminal Out on Bond (67 Prior Arrests)

It’s like something out of a horror movie. In broad daylight, being attacked by four people as you try and enter your car, your arm and clothes ripped off as your assailants try and speed off in your car. Her last moments on earth were being dragged down the street by four carjackers beside her.

One of those four arrested for the barbaric assault had a 2020 aggravated burglary charge dropped at the behest of the victim.

The individual they targeted for carjacking was a 73-year-old white grandmother.

Her name is Linda Frickey. She leaves behind a husband, two children, and three grandchildren.

A 73-year-old grandmother was killed during a horrific carjacking in New Orleans when her arm and clothes were ripped off after she got stuck by the seatbelt as the attackers drove off, authorities said.

Linda Frickey was carjacked by four teens about 1:30 p.m. Monday as she was leaving a business in New Orleans’ Mid-City neighborhood, WWL-TV reported.

She was dragged for almost an entire block on North Scott Street, according to the outlet.

“Her arm was severed from her body,” police Superintendent Shaun Ferguson said.

An eyewitness told WWL-TV that the victim was trying to put something in her car when a person “jumped in and kicked her out and she got caught in the wheel well.

“I heard screaming, like, ‘You’re about to die’ screaming!” the witness said.

Nearby resident Todd Eckernc said he saw the speeding car dragging the woman by the seatbelt.

“The door had closed on the seatbelt, and she was stuck in it … I got out of my vehicle screaming, ‘Please stop!’ Other neighbors were also screaming,” he told Fox 8.

Another neighbor who had been walking in the area described the gruesome scene.

“She was screaming, and she was screaming to please let her go and then they slowed down and opened the door to kick her out,” Leanne Mascar told Fox 8.

“As soon as I saw her, I screamed. I just started running for her — I thought if I could somehow, I don’t know what I could do, but I thought if I could dislodge her from this car … when I looked down her body was already there, and her arm was … It’s just not something you expect to see,” she said.

“She was laying there naked, and I thought the indignity she just suffered, it was already too much,” Mascar added.

Her husband, Mark Mascar, told the outlet: “Just to sit beside a woman who’s a mother or grandmother and watch her fade away, as my wife said, we were praying.

Police recovered the stolen vehicle about 13 blocks away, but the four carjackers escaped and are still being sought.

Ferguson asked for help from the public.

“Someone knew something before it was going to occur and now that it has occurred, you know that someone knows that information as well,” the police superintendent said.

Tim Levy of the Greater Mid-City Business Association told WWL-TV that “in six months, we’ve gone from some very positive things in Mid-City to … fear. Citizens I talk to, they’re all buying guns.”

This happened at 1:30 p.m. on a Monday in New Orleans. Four black teens violently attacked and murdered a white grandmother in broad daylight, ripping off her arm in the process of stealing her car. She bled to death on a street where she was simply trying to drive her car home.

But it’s not a horror movie. What happened Linda Frickey isn’t Russian disinformation, but reality, for this white grandmother was murdered by four black teens at 1:30 p.m. in a “carjacking gone wrong.”

Rest in peace, Linda. The mainstream media silence surrounding your death and the four black teens who took your life is once again proof anyone promoting the idea of white privilege, systemic inequality and implicit bias is not only lying, but engaging in clearly anti-white activities.