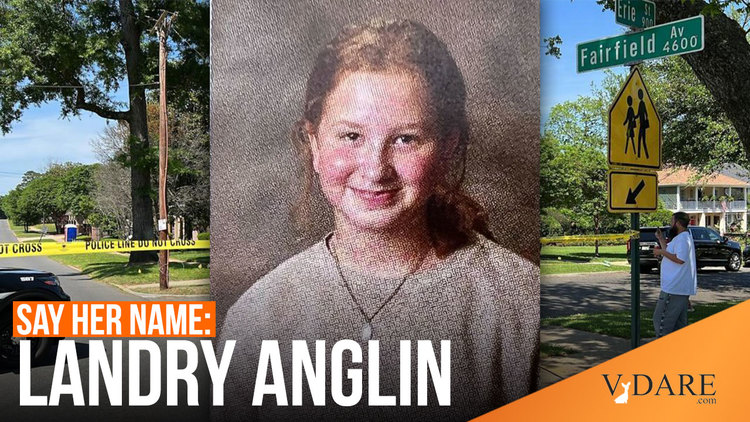 Her Name Is Landry Anglin: White Teenage Girl Relaxing In Her Home Murdered By Stray Bullet Fired During Rolling Gun Battle Between Blacks In Shreveport, LA

She was just trying to enjoy life in her home.

Her name is Landry Anglin.

SHREVEPORT, La. – The Caddo Parish Coroner’s Office has released the name of the girl killed by a stray bullet Sunday afternoon in Shreveport’s South Highland neighborhood. She is Landry Anglin, 13, a Caddo Middle Magnet student.

The shooting happened in the 4500 block of Fairfield Avenue just before 1:30 p.m. Police say the shots came from one of three vehicles on Fairfield engaged in a rolling shootout. One vehicle believed to be involved has been recovered. Police are still searching for the other two.

Anglin was inside of a home when she was hit. She was rushed to Ochsner LSU Health where she later died.

Grief counselors were made available for students that attend Middle Magnet.

In a normal society, Anglin’s death would be justification for using the RICO Act on every black gang in Shreveport. Immediately arresting every black gangbanger responsible for nearly all fatal and nonfatal shootings.

In our society, we are supposed to turn a blind eye to who killed Landry, as she simply was relaxing in her home and a rolling black gun battle was occurring.