Her Name is Kera (And Kyndal) Teel: Pregnant White Woman Gunned Down by Three Black Males, Daughter Dies After Being Born

"Orcs are roaming freely across our lands. Unchecked, unchallenged, killing at will." - Lord of the Rings: The Two Towers

What do you even say this story? A 7-month pregnant white woman, Kera Teel, arrives home to her apartment and is ambushed by three black males.

She was with her mom after visiting a doctor in Galveston for a checkup on the progression of her daughter, Kyndal Jae Teel. Kera and her husband had already named their unborn daughter, and she was to soon enter the world and be a little sister to the couples one-year-daughter, Alaya. 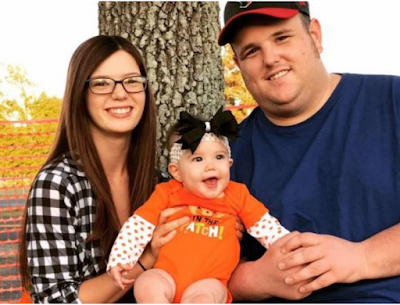 Kera, Alaya, and Andrew Teel: Kera was murdered by three black males after returning from a doctors visit, where she would get to see an ultrasound of daughter, Kyndal. She was seven-months pregnant...

Upon arriving home after seeing images of her daughter via ultrasound, Kera and her mother would be ambushed by three black robbers.

Her mother, Mindy Morris, held Kera (by extension, her granddaughter too) in her arms as she was dying, begging her stay with her.  [19-year-old pregnant woman fatally shot, capital murder investigation underway, KFDM.com, June 6, 2017]:

Detectives are investigating the case as a capital murder.

During the robbery, Kera Teel, who was seven months pregnant, was fatally shot.Officers responded to the scene at Sienna Apartment Homes, at 6155 Sienna Trails, after a report of gunshots shortly before 2 a.m. The complex is in north Beaumont off Concord Road.

The two women had just gotten back from Galveston, where they had gone for a doctor's visit.

Authorities are investigating another nearby robbery of a store off Highway 105 to see if it could be connected.

At this time they are looking for three men, but do not have much of a description.Here is the full statement released later in the morning by Beaumont PD:There are currently two online fundraisers to support the Teel family.

Kera and her husband Andrew Teel also had a 1-year-old daughter in addition to the unborn child.

Southeast Texas Crime Stoppers is offering a $2,000 reward to someone who has information in regards to the crime.

On Tuesday, June 6, 2017 at about 1:50 a.m., Beaumont Police responded to 6155 Sienna Trails, in reference to shots fired. Upon arrival Officers located a 19 year old female, who was 7 months pregnant, suffering from gun shot wounds, in the parking lot of the complex. The victim was transported to St. Elizabeth Hospital, where her baby was delivered. Both the mother and child were pronounced deceased. The victim’s mother was also inside the vehicle during the shooting. Preliminary investigation has revealed that the suspects are 3 black males, however physical descriptions are limited at this time. The investigation is on-going and the victims identities will be released this afternoon. Anyone with information is asked to call Beaumont Police at 409-832-1234 or Southeast Texas Crime Stoppers at 409-833-TIPS (8477).

Kyndal Jae Teel was born after her mother was murdered by three black males.

Kera would never get to hold Kyndal.

Kyndal would never get to be a little sister to Alaya, and be held by her daddy.