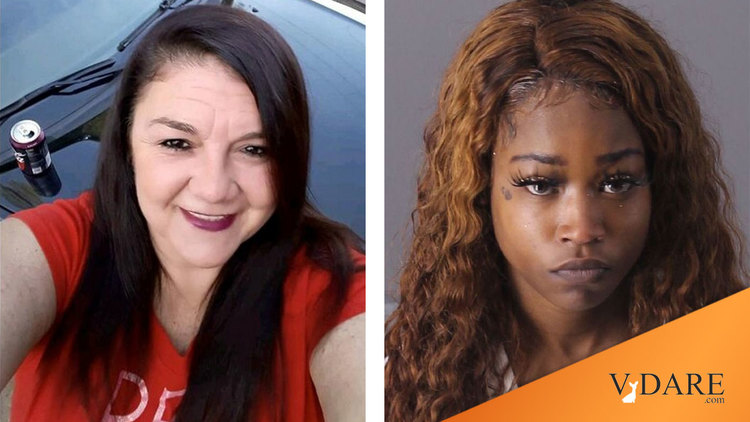 A white grandmother of five was on her way to work when she was killed by a habitual black female criminal in a “street racing gone wrong” incident. The black criminal was awaiting trial for first degree assault and a burglary charge (with a firearm) at the time of the street racing incident in Birmingham, Alabama, which ended with the death of the white grandmother.

Her name is Brandy Ballard.

Oh, and once out on bail, the black career criminal went on Facebook to post a video blaming the white grandmother for the wreck.

Relatives of a grandmother killed when she was hit by a woman police say was street racing are livid after the suspect posted a Facebook video with harsh words for the victim.

Carmesia Flannigan, 22, is charged with murder, leaving the scene of an accident with injury and unlawful possession of a controlled substance in the Sunday-morning death of 52-year-old Brandy Ballard.

Following her release from jail, Flannigan posted a seven-minute video laced with expletives during which she said, “That old ass lady swerved in my lane.” 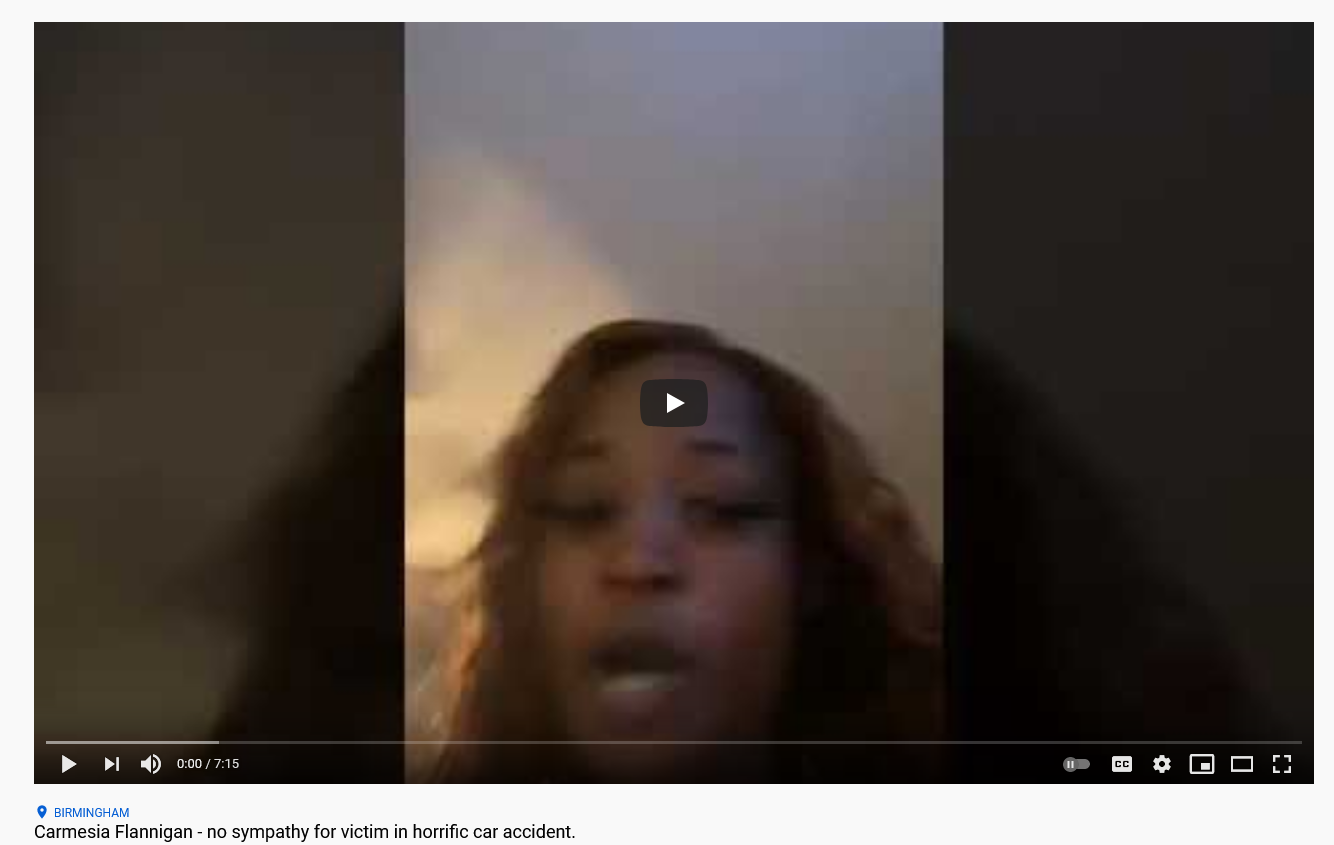 The video was deleted from Facebook but was posted to YouTube and had nearly 10,000 views by Wednesday morning. A second video was also posted that lasted nearly 25 minutes and was much the same.

“I was so mad I cried,’’ said Tabatha Moore, Ballard’s niece, after viewing the videos. “It’s very frustrating. It’s humiliating.”

“There’s no remorse,’’ Moore said. “There’s no heart involved. I want it stopped.”

Jefferson County prosecutors on Wednesday morning filed to have Flannigan’s bond revoked, and District Judge Katrina Ross granted that request, issuing a warrant for her arrest and ordered she be held without bond. A March 31 hearing has been set for the bond revocation.

Flannigan didn’t immediately respond to a request for comment and ,as of 8:30 p.m. Wednesday, was not in custody.

At the time of her arrest Monday, she was already awaiting trial on a first-degree domestic violence charge from earlier this year and a burglary charge from last year.

In the domestic violence case, court records show, Flannigan is accused of firing a gun into an occupied dwelling on Jan. 3, wounding a woman in the foot. Charging documents describe the victim as a “current or former parent.” She was arrested Jan. 8 and released the same day on $15,000 bond.

In March of 2020, authorities contend, Flannigan, while armed with a gun, broke into a home armed with intent to commit a theft. She was released from jail on $25,000 bond in that incident. In December, the burglary case was forwarded to be heard by a grand jury for indictment consideration.

Assistant District Attorney Jason Wilson, in court records filed Wednesday morning, filed bond revocation motions for her two previous cases. As a condition of bond in those cases, Flannigan was to refrain from further criminal activity.

In that motion, Wilson says Flannigan violated those conditions when, on Sunday morning, she was racing her vehicle in excess of the speed limit on Arkadelphia Road when she crossed the center lie and struck an oncoming vehicle head-on.

Ballard, a home health care worker and grandmother of five, was on her way to work when she was killed. She has been described as the glue of her family and a Godly woman with a heart of gold. Sober for three years and active in the AA community, Ballard had a passion for helping others with substance abuse issues.

Authorities said Ballard was traveling southbound in the 800 block of Arkadelphia Road when Flannigan’s Chevrolet Camaro that crossed over the center line and plowed into Ballard’s vehicle. Ballard died just two blocks from her home.

In the Facebook video, a defiant Flannigan said she’s been wrongly accused, “But I’m not mad. I handle my (expletive) like a mother (expletive) OG would,’’ she said. “Yeah, she dead. She dead but I didn’t do it. She did it to her mother (expletive) self because she ran into me.”

“I been driving Camaros,’’ she said. “This ain’t my first or my last one.” She pointed out that her car would be fixed in 21 days.

“It’s just so uncalled for,’’ Moore said. “We haven’t laid (Ballard) to rest yet and we’re being harassed. Who does that to someone’s family?”

A white grandmother of five was on her way to work when she was killed by a habitual black female criminal in a “street racing gone wrong” incident.

This black female criminal, at the tender age of 22, was out on bail for multiple crimes she was awaiting trial for when she engaged in street racing ultimately costing Brandy Ballard her life.

The criminal justice system in America needs an enema.