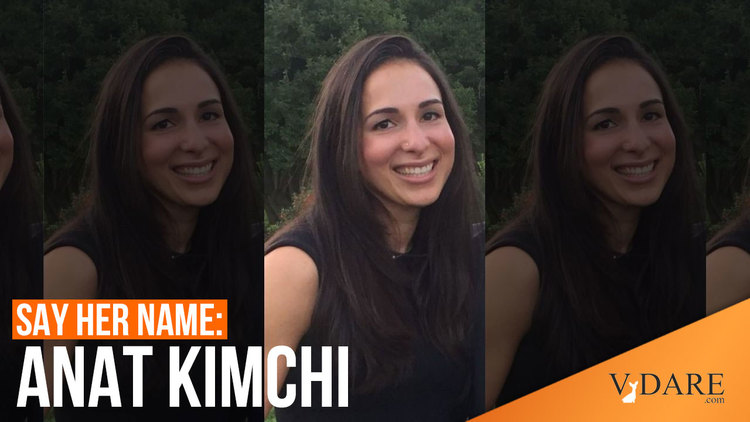 Her Name is Anat Kimchi, a white female murdered randomly by a homeless black man in Chicago.

The 31-year-old was a doctoral candidate in the University of Maryland’s Department of Criminology and Criminal Justice.

A 31-year-old doctoral candidate at the University of Maryland was fatally stabbed in Chicago over the weekend, Chicago Police said.

According to our CBS affiliate in Chicago, the 31-year-old woman was “stabbed in the back and killed in broad daylight” Saturday afternoon in downtown Chicago.

The University of Maryland identified the victim Monday as Anat Kimchi, who was a doctoral candidate in the Department of Criminology and Criminal Justice.

“The University of Maryland grieves the loss of Anat Kimchi, a brilliant young scholar,” the university said in a statement. “We offer our condolences to her friends and family during this difficult time.”

Kimchi’s family also made a brief statement, asking for privacy as they grieve.

“The Kimchi family is mourning the loss of Anat and asks for privacy during this difficult time,” the statement said.

According to police, Kimchi was walking on a sidewalk near the Eisenhower Expressway around 4 p.m. when she was attacked.

“A man came up, took out a knife, and stabbed the woman from the back,” CBS Chicago said. “A dispatcher reported over police radio that the woman was found bleeding from her neck. The woman was taken to Northwestern Memorial Hospital, where she was pronounced dead. The man who did it ran away.”

Police described the area where she was attacked as “secluded” and “not well-traveled.”

“We suspect this likely is a homeless person that secreted himself in the bushes and came out and committed this heinous crime,” Superintendent David Brown said in a media briefing Saturday.

Meanwhile, friends and family continue to mourn the loss of Kimchi who grew up in Maryland most of her life. Her family resides in Montgomery County where she leaves behind her parents and two siblings.

Maria Olsen said she called Kimchi her friend for nine years. She described the 31-year-old student as welcoming, warm and bright.

“She was just a beautiful soul and she will be missed by so many people,” Olsen told WUSA9. “She was really someone with whom I shared my personal experiences with life and life’s challenges and how to overcome them and she did the same for me without reservation.”

Kimchi was interested in courts, sentencing and corrections, according to Choice Research Associates, where she had worked as a consultant in recent years.

One of her projects was assessing the disparity in probation sentences, and evaluating the impact of placing female juvenile suspects in custody.

“One of her projects was assessing the disparity in probation sentences…”.

One wonders how long the criminal history of the black male who murdered Ms. Kimchi dates back to, and if he was on probation at the time of her murder in Chicago?

Dedicating her life to fight for imaginary victims of systemic racism, implicit bias, and structural inequalities (all due to white privilege), she was murdered randomly by a black male in Chicago. In her last moments, she found out the true privilege of whiteness in 2021 America.