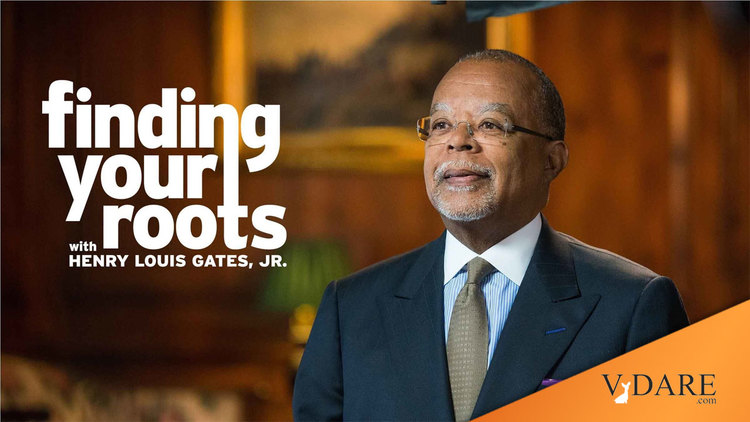 Henry Louis Gates: My PBS DNA Show "Finding Your Roots" Isn't About Race, Which Does Not Exist, It's About Ancestry!

We Need a New Language for Talking About Race
March 3, 2022

Henry Louis Gates is the chairman of the Harvard Afro-American Studies department and host of the PBS show “Finding Your Roots,” in which celebrities have their DNA scanned and are told their racial backgrounds. Hence, he’s in a bit of a tight spot as the Race Does Not Exist dogma hardens. Here he tries to wriggle out:

The other day, while teaching a lecture class, one of us mentioned in passing that the average African American, according to a 2014 paper, is about 24 percent European and less than 1 percent Native American. A student responded that these percentages were impossible to measure, since “race is a social construction.”

Given our country’s history of scientific racism — and all of the horrible crimes and abuses that African Americans have been subjected to in the name of science — the fact that race is a social invention and not a biological reality cannot be repeated too much. However, while race is socially constructed, genetic mutations — biological records of ancestry — are not, and the distinction is a crucial one.

To be fair, we really can’t blame this student for being confused. To varying degrees, we have all inherited a muddled understanding of race, ancestry and phenotype from the Enlightenment

Except that the Race Does Not Exist belief is largely a fairly recent concoction. As far as I can tell, it suddenly leapt to dogma during Bill Clinton’s 2000 Rose Garden ceremony for the Human Genome Project, mostly due to entrepreneur Craig Venter’s blustering speech in which he claimed: “In the five Celera genomes, there is no way to tell one ethnicity from another.”

Of course, since then, tens of millions of people have had their ethnic ancestry measured to three significant digits by commercial DNA firms such as Ancestry.com. But that hasn’t much impeded the rise to dominance of Venterism.

, an era when European savants freed themselves from biblical explanations of the species and claimed the right to tell all of humankind — particularly Africans and people of African descent — who we supposedly are. …

Fast-forward to our era, when new advancements in technology are once again changing the way we think about human origins. With the recent rise in availability of tools for individual genetic analysis, tens of millions of people have eagerly had their DNA tested — hoping, among other things, to find out where their ancestors hail from.

The specificity with which this new technology is able to determine individual origins is staggering. For example, one of us, Henry Louis Gates Jr., knows, purely through his DNA, that he is descended from an Irish American man who fathered his great-great-grandmother’s oldest son, because Gates’s y-DNA signature is one that he shares with a ton of men in Ireland. CeCe Moore, a well-known genetic genealogist, has identified that forebear’s name and biographical details, long a mystery in the Gates family, by analyzing the family trees of all of the people with whom Dr. Gates shares DNA in publicly available databases. On his mother’s line, he is descended from a white woman, most likely from England, who had a child with a man of sub-Saharan African descent at some point during the time of slavery, though their identities have been lost.

It would be an understatement to say that he was astonished to learn that his recent ancestral mutations trace back equally to sub-Saharan Africa and to Europe. 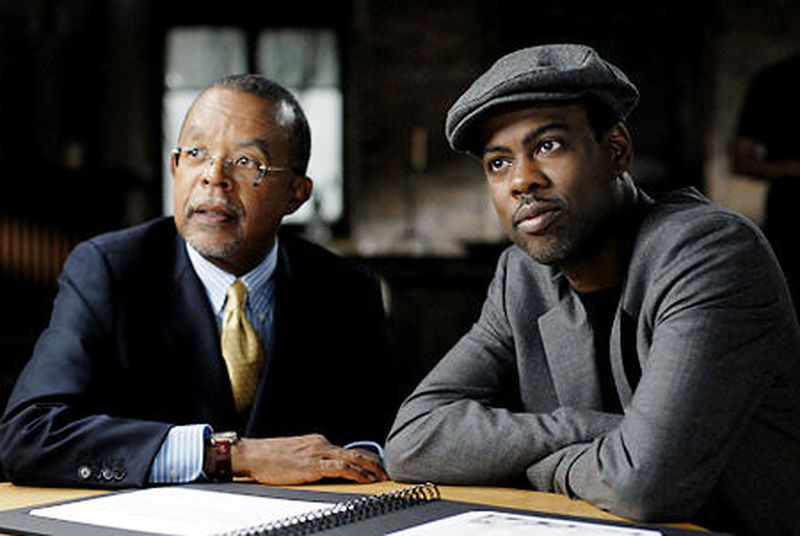 Doesn’t seem that astonishing to me. Here’s a picture of Dr. Gates with comedian Chris Rock:

As a friend of his joked: Who could have guessed that a Black scholar who has spent so much of his professional life searching for his long-veiled African ancestry would finally find it — only to discover that he’s half a white man. That friend’s joke allowed him to make a point: There is no category for white in genetic analysis; half of his ancestry traces back to regions in Europe. We should never forget that whiteness, like Blackness, is just another social fiction. 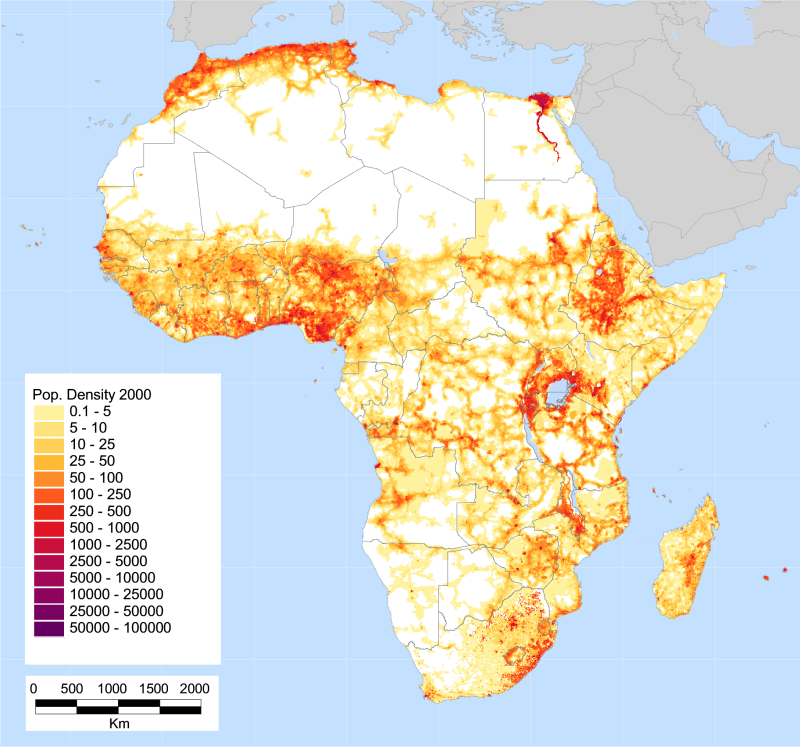 But what else are you going to do if you are Gates and you have a nice thing going with your PBS show about DNA testing, but naive, ignorant college students keep telling you it’s impossible to use DNA to figure out race.

I think the great majority of intelligent people can’t call up an image in their heads of population density maps of the world.

So they default to assuming that population density is constant all over the globe (including, hilariously, the oceans), so therefore it’s only logical that nobody could possibly draw a line between one race and another. Races must just constantly bleed into each other in smooth gradients.

Here’s a map of Africa’s population density. As you can see, however, there is a giant gap known as the Sahara Desert in northwest Africa between the northern populations and the sub-Saharan populations. That’s why they are called sub-Saharan. (There is somewhat more overlap in northeastern Africa, but that area is almost irrelevant to the ancestry of the Descendants of American Slaves.)

Moreover, until 1492, there was an even more overwhelming gap called the Atlantic Ocean.

There can be fewer more dramatic demonstrations that race is a social construction than his own DNA results.

Uh, no. Before the Age of Exploration, about half of his ancestors were white and half were black.

Almost nobody in America is aware that recent DNA studies have shown that people who self-identify as white tend to have only tiny amounts of black ancestry on average. When you think about it, that’s perfectly understandable, but who thinks about it?

Another common logical assumption is that if we dropped out of the black race individuals who self identify as black but are heavily white, such as Henry Louis Gates and Barack Obama, then unfortunate statistical disparities between races would be reduced. In truth, it’s the other way around.

And therein lies the promise of this new science. DNA, used in this way, can restore a remarkable amount of information about the ancestors whose traces we carry around every day in our genomes. The multitude of population clusters, regions and genetic groups reflected in DNA tests counters existing narratives that try to reduce the astonishing variety of the human community to the four or five socially constructed races of man about which prior generations of students learned in biology class.

But those Enlightenment continental-scale categories are more or less what the government uses to hand out affirmative action benefits and detriments. Are you calling for making affirmative action unfeasible, Dr. Gates? Do tell us more.

A more “nuanced” approach might be to break out government reporting of economic statistics not just by white and black, but by, say, Quebec-American vs. Ashkenazi. But I’ll let Dr. Gates suggest that idea…

… While, biologically speaking, the idea of individual human races with different origins is as farcical as the medieval belief that elves cause hiccups

But you just said that your DNA test showed that half of your ancestors originated in Europe and the other half in sub-Saharan Africa.

, the social reality of race is undeniable. …

But if we can, at the very least, embrace the understanding that race (a toxic social construction) and ancestry (a shared genetic history) are not only distinct but also fundamentally opposed — and teach that in our classrooms — it could go a long way toward freeing us from some of the binds in which scientific racism have trapped us.

In other words, my TV show Finding Your Roots has nothing about race, it’s just about ancestry. Race and ancestry are fundamentally opposed because reasons.