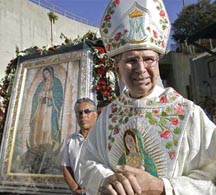 One might imagine that the Catholic church would realize its moral authority was diminished after two decades of pedophile priest trials, which showed that church hierarchy had knowingly protected perverts who sexually abused children. Last summer for example, Los Angeles Archbishop Roger Mahony (a big friend of mass amnesty) was forced to pay $600 million to settle abuse cases.

But if anything, the arrogant leaders have become more insistent that the little people in the pews must obey their elite dictates or face dire consequences.

And apparently, congregants who vote for America's lawful sovereignty against amnesty can expect to spend eternity in the Hot Zone, according to the Conference of Catholic Bishops.

Proclaiming a sense of new energy and empowerment, the nation's Roman Catholic bishops on Wednesday issued instructions to Catholic voters that their eternal salvation could be at stake when they cast ballots. [...]

Voters are implored not to support abortion-rights political candidates but also advised that views on abortion should not be the sole factor. Catholics should also weigh church teaching on such moral issues as immigration, just war and poverty, bishops said. [Catholic bishops say voters' souls at stake Chicago Tribune 11/15/07]

I downloaded the full report (amusingly titled "Faithful Citizenship" with pdf available here) to see whether the reporter might have gotten a little carried away with the verbiage about eternal damnation for incorrect voting. But page 16 says:

It is important to be clear that the political choices faced by citizens not only have an impact on general peace and prosperity but also may affect the individual's salvation.

So, the Trib story did not overstate the threats — fascinating. I will be interested to see whether anyone pipes up to object.