Hearing Is Held on Egyptian Muslim Kidnapping of Christian Women

On Friday, Congressman Chris Smith held a hearing to investigate the growing problem of Christian Coptic women being kidnapped in Egypt and forced to convert to Islam. The problem is not new, but the election of the Muslim Brotherhood to power presents a threatening future to Copts.

The usually Islamo-fawning BBC had a surprisingly decent report of forced conversions of young Christian women in Egypt a couple years ago:

Below, a photo of girls reportedly kidnapped and forced to convert to Islam, according to the 2009 report The Disappearance, Forced Conversions, and Forced Marriages of Coptic Christian Women in Egypt. 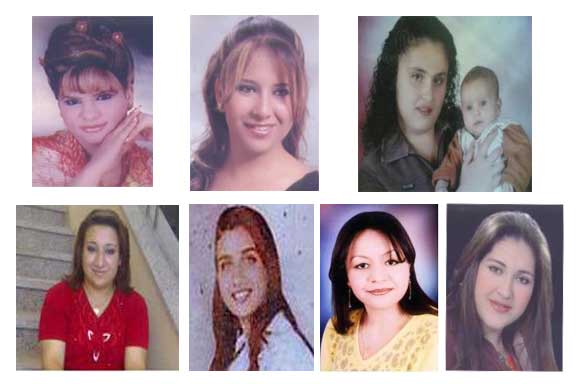 Since many refugees Washington accepts are fraudulent in terms of having a “well founded fear of persecution” (which is the criterion for being a refugee), it would be preferable to welcome genuine victims, like Egyptian Christians. The government should in particular avoid admitting more Muslims as refugees, since they are often the ones doing the job of oppressing minorities at home. The percentage of Muslims in a nation’s population is an accurate measure of imposed sharia law and oppression of non-Muslims.

Why import more trouble than we already have?

Washington’s refugee program, based as it is on maximum diversity, has been a magnet for criminals, jihadists and cultures generally incompatible with our own. It has become very wrong-headed and harmful to our own society.

If America wants to lend a helping hand through a refugee program based on genuine need, then we should admit Christians suffering in oppressive Muslim societies.

WASHINGTON — Coptic Christians make up the largest Christian community in the Middle East, which also makes them sitting targets for violence and discrimination.

As Egypt moves toward “democratic reforms,” the situation is deteriorating for the Coptic church, especially Christian women.

“I kept asking myself, ‘What if this man hadn’t saved me. Where would I be now?’” a Coptic Christian going by the name “Ann” said at a hearing in Washington, Wednesday.

Ann is seeking asylum in the United States and recently testified to a congressional committee from behind a wall to conceal her identity and protect her family in Egypt.

She recounted how a man tried to kidnap her last year.

“I was screaming. I didn’t know what he wanted. I had no idea why he was doing this,” she recalled.

Ann managed to escape. But many victims aren’t that fortunate.

According to a new Christian Solidarity International report, the number of disappearances and abductions among Coptic women is on the rise, all with the goal of converting the women to Islam.

“I don’t care who’s in the White House, Democrat or Republican. When women are being abused, when anybody’s human rights are being abused, there just should be no partisanship,” Rep. Chris Smith, R-N.J., said.

Smith hosted the hearing in Washington to highlight the report — titled “Tell My Mother I Miss Her” — and pressure the U.S. government to do more.

“It’s a war of attrition against the Christians, using the women as scapegoats,” explained Michele Clark, a Chrisian Solidarity International boad member and co-author of the report.

Clark added that while most cases include kidnapping, abuse, and forced marriages, some radicals also use the lure of love and romance.

Some experts believe the abductions are part of a wider campaign to impose an Islamist agenda.

“The practices of abducting, torturing, and forcing conversions on Coptic women or any element of society is a terrorist act,” Middle East expert Walid Phares said.

The number of asylum petitions has also skyrocketed. The U.S. is granting more requests to victims like Ann, who said she’s grateful but also can’t help but feel a tinge of guilt.