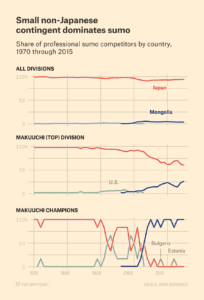 Japanese sumo wrestling has perhaps the oldest dataset of professional sports statistics in the world, going back to 1761. (English thoroughbred racing pedigree tables are of similar antiquity — I traced one Kentucky Derby entrant back to a progenitor who carried a cavalry officer in the Battle of Boyne in 1690.)

Japan was perhaps the only culture that was modernizing somewhat independently of Europe. Most of the major old civilizations of the world were in stagnation as Europe was taking off, which is one reason Europe dealt with them so easily. Isolationist Tokugawa Japan (1603-1867), though, while falling further behind Europe, was at least making progress. Developing sports statistics is obviously not a major breakthrough, but it does reflect a culture that is innovating.

A long article by Benjamin Morris in FiveThirtyEight looks at what can be found out from a German sports nerds website of all sumo stats since 1761.

The problem with sumo as Japan’s natural sport is human biodiversity: the sport rewards height and weight, and the Japanese just aren’t very tall and fat. The last time I checked in on sumo, 1998, giant English-speaking Polynesians like Konishiki and Akebono were starring in Japanese sumo. They’ve faded out, but nowadays, the champions in Japan are almost all Mongolians, with an occasional Eastern European:

Today, international wrestlers have taken over the sport. In January 2016, then-31-year-old Japanese ozeki Kotoshogiku won his first tournament. This might have been an unremarkable event, except that it was the first tournament won by any Japanese wrestler since January of 2006. Of the 58 tournaments in between, 56 were won by Mongolians; the other two were won by a Bulgarian (Kotooshu) and an Estonian (Baruto).

It’s a nature and nurture thing: Mongolians tend to be tall and strong, but they also come from that wrestling belt that extends along the Eurasian steppe into Eastern Europe, where many of the cultures love wrestling.