A catastrophic problem the anti-white Left has in the present assault on traditional American freedoms is that it is facing the descendants of the men who invented empirical science.

A classic case is presented below: 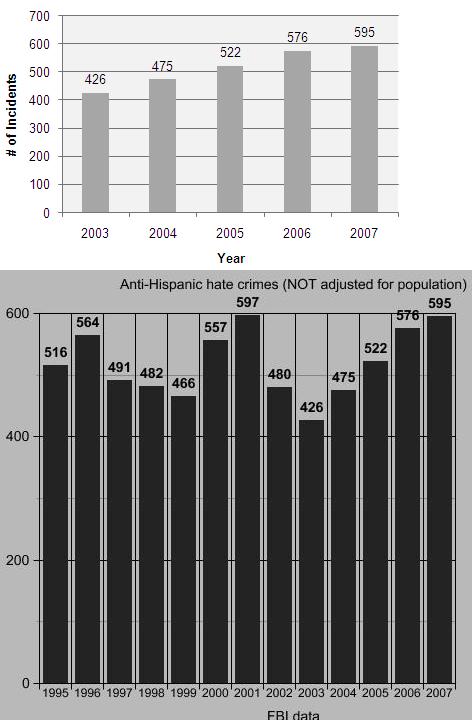 The operator of the 24ahead.com blog decided, in the great old tradition, to have a look around - no doubt wearing a Coonskin cap.

The ominous-looking graph on the top (from the LCCR) shows anti-Hispanic hate crimes from 2003 to 2007. The graph on the bottom (created by me) uses the same data set, but shows earlier years. Note that 2001 was higher than 2007. And, note also that neither chart are adjusted for population. If that were done, the bottom chart would show that such crimes have actually declined as a percentage of the Hispanic population from 1995.

VDARE.com emphasis and comment: The latter point is unquestionably true.

In other words, there is no solid evidence supporting this power grab.

The LCCR (Leadership Conference for Civil Rights Education Fund) report (PDF) to which 24ahead referred, has a very explicit discussion of the targets for their planned coercion:

Some groups opposing immigration reform, such as the Federation for American Immigration Reform (FAIR), the Center for Immigration Studies (CIS), and NumbersUSA, have portrayed immigrants as responsible for numerous societal ills, often using stereotypes and outright bigotry. While these groups, and other similar organizations, have strived to position themselves as legitimate, mainstream advocates against illegal immigration in America, a closer look at the public record reveals that some of these organizations have disturbing links to or relationships with extremists in the antiimmigration movement..

As I keep having to say, the immigration debate is in danger of being shut down by legal force. Where are these Plutocrats of the Immigration reform movement: NumbersUSA, FAIR, and CIS?

Or is this just a job?