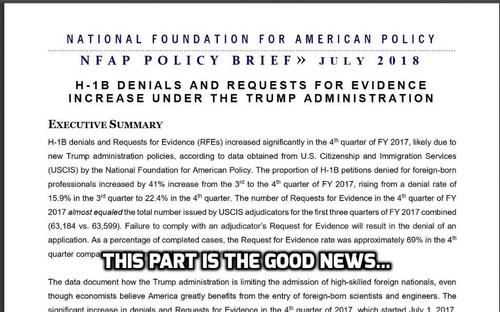 President Trump is notorious for making off-the-cuff remarks which are wildly at odds with his prior positions but his now infamous statement at last week’s State of the Union about increasing legal immigration to a level greater than ever before has his supporters worried that his administration might be about to make a serious blunder.

These types of sloppy statements and ensuing panics over apparent flip-flops are nothing new as Trump has frequently done this even back during his presidential primary campaign. Then candidate Trump had to issue a press release from his campaign after he made it seem that he was open to issuing more H-1B visas while answering a debate question.

The H-1B program is neither high-skilled nor immigration: these are temporary foreign workers, imported from abroad, for the explicit purpose of substituting for American workers at lower pay. I remain totally committed to eliminating rampant, widespread H-1B abuse and ending outrageous practices such as those that occurred at Disney in Florida when Americans were forced to train their foreign replacements. I will end forever the use of the H-1B as a cheap labor program, and institute an absolute requirement to hire American workers for every visa and immigration program. No exceptions. [Trump Clarifies Position on Foreign Workers After Debate, Talking Points Memo, March 4, 2016]

And in a later primary debate, Trump reiterated the position that legal immigration results in both lower wages and higher unemployment for U.S. workers:

The good news is that President Trump has actually governed more consistently with his anti-H1-B statements. The President issued an Executive Order a few months after his inauguration entitled “Buy American and Hire American” which prioritized the interest of U.S. workers when considering the petitions of foreign job seekers looking to enter the U.S. job market.

In order to create higher wages and employment rates for workers in the United States, and to protect their economic interests, it shall be the policy of the executive branch to rigorously enforce and administer the laws governing entry into the United States of workers from abroad, including section 212(a)(5) of the Immigration and Nationality Act (8 U.S.C. 1182(a)(5)).

It appears that his agencies have been complying with this order as immigration lawyers across the country are bemoaning the fact that a record number of H1-B visa applications have been denied versus what was approved in the past.

A new analysis for the Cato Institute has found that the Department of Homeland Security rejected 11.3 percent of requests to the immigration agency, which include those for work permits, travel documents and status applications, based on family reunification, employment and other grounds, in the first nine months of 2018. This is the highest rate of denial on record and means that by the end of the year, the United States government will have rejected around 620,000 people — about 155,000 more than in 2016. [America Is Rejecting More Legal Immigrants Than Ever Before, by David Bier, The New York Times, November 15, 2018)

Only someone from the Cato institute would read that and think it’s bad news. This is obviously great as it means more higher-paying jobs for Americans workers and traitorous immigration attorneys who fail to get results for their clients are seeing their formerly profitable area of practice suffer as a result.

Based on this news, you’d think that President Trump is truly making America great again but, unfortunately, the story doesn't end there. Instead, the Department of Homeland Security proposed new H-1B rules which appear to be greasing the skids for a massive expansion.

The Department of Homeland Security's proposed new rules on the H-1B program are deeply disappointing as they:

[DHS's Proposed New Rules for H-1B Are a Bonanza for Employers, by David North, Center for Immigration Studies, December 4, 2018]

And then, to add to the impending feeling of despair, the President went and tweeted this:

H1-B holders in the United States can rest assured that changes are soon coming which will bring both simplicity and certainty to your stay, including a potential path to citizenship. We want to encourage talented and highly skilled people to pursue career options in the U.S.

That tweet, which went so far as to discuss granting citizenship status to H1-B Visa holders, just adds to the schizophrenic appearance of the Trump Administration on the H1-B issue. Is this more of Trump just being Trump or does it signal a victory for the Koch brothers wing of Conservatism Inc.?