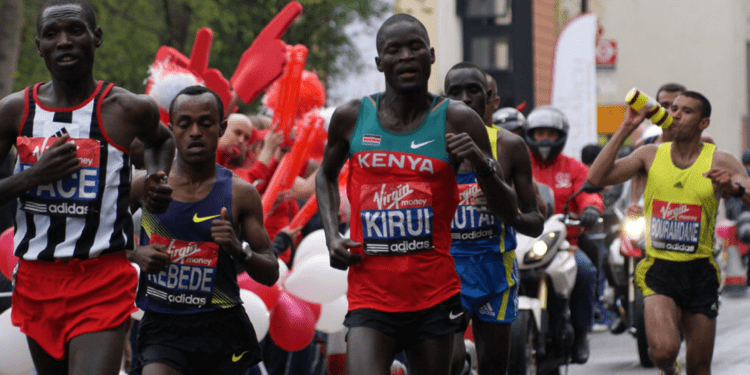 GUARDIAN: The Fact That Narrow-Hipped, Narrow-Skulled Kenyans Keep Winning Distance Running Races Has NOTHING to Do with Race, You Racist, You

The concept of ‘race’ persists, even though it is biologically meaningless. This important book considers why

Thank you @GuardianBooks for your brilliant review of #SUPERIOR by @AngelaDSaini - we agree, it IS ‘superb’ https://t.co/prVy7NKZZI

Above, runners, including eventual winner Justin Kemboi from Kenya, compete in the Two Oceans ultra-marathon in Cape Town in 2018.

Many Kenyan running stars have notably narrow skulls, like Melly in the photo above. I wouldn’t be surprised if narrowness of skulls is related to narrowness of the skeletal pelvis. Wider pelvises are better for birthing babies, but worse for efficiency of stride. Kenyan Olympians tend to have narrow pelvises and narrow skulls, which would seem like a reasonable evolutionary package for highland mild climate grasslands inhabited by horseless cowboys who run in search of stray calves.

More than 90% of the top 20 performances in middle- and long-distance running are by black people of African heritage. Are they simply biologically better at it? That is precisely the kind of casual assumption that, as science writer Angela Saini shows in Superior, has kept “scientific racism” alive for centuries. In fact, more than half of those performances are by Kenyans, coming mostly from eight small tribes. One theory is that, having lived at high altitude for millennia, they have adapted to make more efficient use of oxygen when running. But studies have found no physiological advantage, and it’s possible that the answer is instead sociological. One thing is sure: having dark skin pigmentation is as irrelevant here as speaking a Kenyan language. The idea of “race” has nothing to contribute to the debate.

It’s a little known fact that many Kenyan distance running medalists are the offspring of Bangladeshi fathers and Guatemalan mothers. You’d be surprised. In contrast to racist stereotypes about genealogy, scientists have proven it’s all totally random what children come out looking like. The storks are assigned which babies to deliver by lottery.

If you’re a typical Guardian reader, you might feel fine about, or flattered by, the notion that black people are better runners – it sounds positively antiracist, right? Yet this is the sort of reasoning that feeds racism: that there are meaningful biological distinctions between groups of humans (often on the basis of visible, literally superficial characteristics) that allow them to be categorised into distinct “races”, from which we can meaningfully predict traits.

The problem with scientists, Saini says, is that they too often assume they are above racism

The idea is so deeply ingrained that it is hard even to talk about race without seeming to accept its tenets. This doesn’t simply reflect a long history of prejudice. It is also because “race”, defined in terms of skin colour or facial features, was and sometimes still is a rough-and-ready clue to culture: language, cuisine, perhaps religion and shared moral values. It fits with the way we navigate a complicated world using “good enough” rules of thumb. How, then, can it be as biologically meaningless as Saini says?

The answer is subtle, and in this important book Saini – whose previous book Inferior exploded myths around sex differences – does a superb job of explaining it. Genetics has played a central role in debunking race as a biological entity by showing that there are no clear cut genetic subgroups that map on to our conventional notions of race.

Human beings like certainty. However, most of science outside physics (physics is Dr. Ball’s area), is beset with uncertainty, with, among other disputes, endemic lumping versus splitting controversies.

For example, Does Neighborhood Exist? The concept of “neighborhood” plays a sizable role in the social sciences. On the other hand, nobody knows how to distinguish one neighborhood from another with certainty. For example, the Wikipedia articles on neighborhoods in Chicago are rather contradictory.

Community areas in Chicago
From Wikipedia, the free encyclopedia

The community areas in Chicago, as defined by the Social Science Research Committee at the University of Chicago beginning in the 1920s, are 77 geographical divisions of Chicago. They are now used by the City of Chicago for statistical and planning purposes.[1][2] These areas are well-defined and static. Census data are tied to the community areas, and they serve as the basis for a variety of urban planning initiatives on both the local and regional levels.

Okay, so U. of C. social scientists socially constructed 75 or maybe 77 neighborhoods or “community areas.” But also from Wikipedia:

List of neighborhoods in Chicago
From Wikipedia, the free encyclopedia

There are sometimes said to be more than 200 neighborhoods in Chicago,[1] though few residents would agree on their names and boundaries. A city ordinance prescribing and mapping 178 neighborhoods[2] is almost unknown and ignored even by municipal departments. Neighborhood names and identities have evolved over time due to real estate development and changing demographics.[3] The City of Chicago is also divided into 77 community areas which were drawn by University of Chicago researchers in the late 1920s.[4] Chicago’s community areas are well-defined, generally contain multiple neighborhoods, and are less commonly used by city residents.[3][5]

In reality, social scientists don’t worry all that much about the fact that they haven’t come up with a “scientific” definition of “neighborhood,” and continue to use whatever they think is reasonable. For example, Harvard economist Raj Chetty, in his search for Magic Dirt and Tragic Dirt, has used “commuting zones,” counties, and Census tracts, which are all quite different, but also rather informative in different ways.

Many people think this proves that social scientists are Not Scientific. But, to me, it’s inherent to the complex nature of reality.

By the way, the reason “race” in the sense of a contest of speed and “race” in terms of a breed are the same word in English is due to the 16th Century English obsession with breeding horses to win horse races.