Greek Olympian Fired For Joke - Or Her Choice Of Political Party? 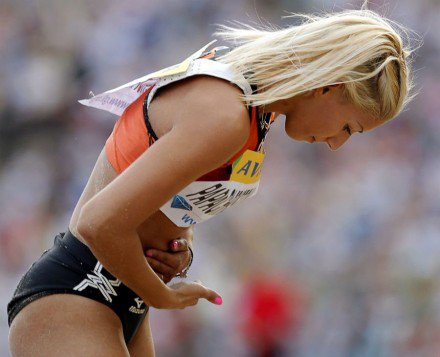 No amount of groveling could save poor Voula Papachristou from being thrown off the Greek Olympic squad for one of the mildest unPC jokes I have ever heard:

‘With so many Africans in Greece, at least the West Nile mosquitoes will eat home made food!’

Kicked out for a racist tweet: Greek triple jumper is banned from the Games after her African 'joke' By Katherine Faulkner and Nick McDermott Mail Online 25 July 2012

That is probably because her real offence is her political stance:

…her support for the far-Right party Golden Dawn made her a controversial figure.

There is no point duplicating Larry Auster on this disgrace:

Another naïve white momentarily forgets about the sacredness of blacks, and has her career ruined

What do you say about a society (Western society) in which you don’t have to say anything actually negative, anything actually biased about any protected group, particularly blacks, to have your career and place in society destroyed, you just have to tell a garden variety joke?

and supported this observation with no less than 12(!) photographs of her.

I hope it is a consolation to Miss Papachristou that millions who most likely would never have heard of her before yesterday would probably agree.

Is a caption necessary?