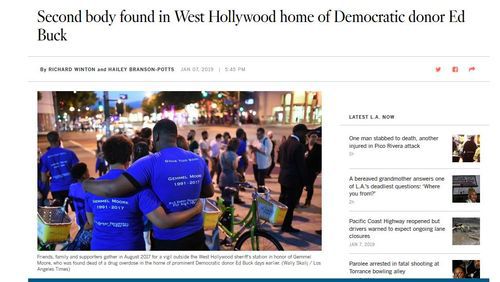 It was the second time a man was found dead at Buck’s apartment. Buck is a longtime political donor, a one-time West Hollywood City Council candidate and a well-known figure in LGBTQ political circles. ..

The dead man’s name has not been released, but Nicole Nishida, a spokeswoman for the Sheriff’s Department, said he was black.

Buck previously was investigated for the death of another black man, the 2017 overdose of Gemmel Moore, 26.

Buck was present for the deaths of both men, the Sheriff’s Department said Monday.

Buck’s attorney, Seymour Amster, said Buck was not arrested and is cooperating with investigators.

“From what I know, it was an old friend who died of an accidental overdose, and unfortunately, we believe that the substance was ingested at some place other than the apartment,” Amster said. “The person came over intoxicated.”

… Moore’s mother, LaTisha Nixon of Texas, and his friends questioned whether Buck’s ties to elected officials and differences in race and class influenced the investigation and whether the drugs that killed him were self-administered.

Moore had been homeless and had worked as an escort. Buck, 64, is white.

The coroner ruled Moore’s death an accident, and an initial review by sheriff’s deputies found nothing suspicious. But the following month, homicide detectives launched a new investigation.

Prosecutors this summer declined to file charges against Buck, citing insufficient evidence, according to court records.

… The Times reviewed pages of a journal that authorities said was found among Moore’s possessions. In it, Moore purportedly wrote in 2016 about using crystal methamphetamine.

“I’ve become addicted to drugs and the worst one at that,” Moore purportedly wrote. “Ed Buck is the one to thank, he gave me my first injection of chrystal [sic] meth.”

The entry continues: “I just hope the end result isn’t death…. If it didn’t hurt so bad I’d kill myself but I’ll let Ed Buck do it for now.”

As Lady Bracknell would say, “To lose one gay black prostitute may be regarded as a misfortune; to lose two looks like carelessness.”

I think she should say, “… to lose two bespeaks of carelessness,” but maybe Oscar Wilde knows what’s funniest?