Episode 85 of my podcast is now posted here (with copious links) and on YouTube. Therein, Kevin Steel and I discuss The Curious Case of CNN and the Anonymous Poster. To recap: President Donald Trump retweeted a gif from his WWE wrestling days (what a world, eh?) of him beating an adversary whose head had been replaced with the CNN logo. CNN was not best pleased with this jest and proceeded to identify and then threaten the man who had made it.

CNN’s crack investigative team discovered the identity of the man and that several of his other Twitter posts were, as the kids like to say, “problematic,” especially one that detailed just how many top CNN employees are Jewish. CNN then threatened to “dox” (expose) the poster unless he removed the posts, apologized and promised to never again offend CNN. The poster did as demanded, and CNN kept its part of the bargain while keeping its threat in reserve should he offend again.

What chain of logic led @CNN, a $64B publicly-held corporation, to threaten to destroy a nobody if he didn't apologize for mocking them? pic.twitter.com/u7aCpgEKsb

Whatever could have persuaded CNN, which is part of Time Warner, a publicly traded corporation with $64 billion in assets, to have engaged in such behavior? One can only conclude that Trump has driven the media insane. Did it not occur to CNN that its Big Brother bullying was not exactly congruent with its claim to be the victim of bullying at the hands of that Twitter meanie in the White House? Did Time Warner forget about its $85.4-billion merger with AT&T, a deal subject to federal approval?

As for the original Twitter user’s problematic posts, the double standard in the matter of pattern recognition has been pushed to its limit. Two examples will suffice to prove this assertion. The Washington Post reported July 16:

Academics and scholars must be mindful about using research done by only straight, white men, according to two scientists who argued that it oppresses diverse voices and bolsters the status of already privileged and established white male scholars.

“I believe what affects the movements in America, what affects our attitudes in America are as much the culture and the arts as anything else,” he said at a Democratic National Committee reception for Jewish American Heritage Month. He cited social media and the sitcom Will and Grace giving Jews a large part of the credit for both.

The vice president also praised Jewish contributions to science, immigration reform, the civil-rights movement, the arts, the law and to feminism.

Erstwhile Canadian David Frum is also not best pleased by President Trump, to put it mildly. And he has no time for pseudoanonymity on social media.

But then Frum has never had to worry about going too far or offending delicate sensibilities. Should one look up “trimmer” in an illustrated dictionary, his portrait would appear. Frum’s glittering 30-year career is based on ceaseless calculation of how many millimeters outside the convention wisdom one can travel while remaining acceptable to the great and good.

Frum is well credentialed, of course, with degrees from Yale and Harvard. More important than that, he is a child of privilege. His father was a wealthy property developer, while his mother, Barbara Frum, just happened to be Canada’s most famous journalist. Oh, and his wife, Danielle Crittenden, just happens to be the stepdaughter of legendary journalist Peter Worthington, cofounder of the Sun Media chain of newspapers. David’s sister Linda also became a journalist and was rewarded for her modest achievements in the family trade with a seat in Canada’s Senate, where she will sit in sober second judgment of the House of Commons until she attains the age of 75.

David and Linda Frum are children of felicity, but for those without access to the nepotism and ethnic affinity networks, life is somewhat more of a struggle. And for those who venture outside the Overton Window, it is positively dangerous. My co-host and I subsist in “f-you” poverty, but our children are grown, and we are resigned to our fates. We needn’t worry about losing our jobs because we don’t have jobs. Yesterday, I received a panicked message from a well-known pseudoanonymous writer who supports a wife and children with respectable employment. I had recorded an interview with him for our podcast, and Kevin Steel had already begun audio production of it. Mr. Pseudoanonymous worried that the increasing popularity of our podcast would lead to him being doxed, given the CNN affair and the call by a French BuzzFeed editor for an army of SJW monkeys to dox all right-wing crimethinkers. So I scrubbed the interview.

David Frum’s dictum would have prevented the publication of classics by Mary Shelley, Thomas Malthus, Thomas Paine, Daniel Defoe and Henry Adams. Not to mention the Federalist Papers. But perhaps that was not part of the syllabus at Yale and Harvard. 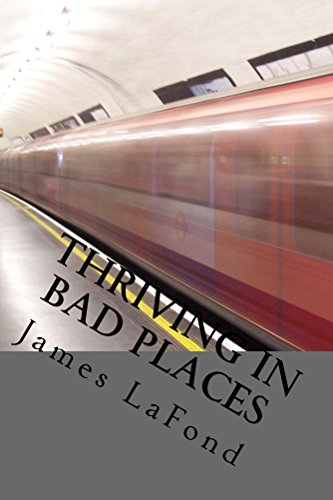 Episode 84 (posted here with links and here on YouTube) is my interview of Baltimore’s Underground Man, James LaFond. So fantastic is LaFond’s life story that I wondered why it had not been optioned by Hollywood—and then I cursed myself for naiveté. LaFond, you see, speaks honestly about race—not from theory but from his own experience—and CNN, the Washington Post & the David Frums of the world have decided that this is not the done thing.

LaFond lives and works in Baltimore, the city of Poe (who also published anonymously) and Mencken, which is disappearing under a wave of savagery. White flight and decades of government-subsidized dysgenic breeding have resulted in a city where both black and whites boast IQs almost a full standard deviation below the putative norms.

The police now largely ignore most of Baltimore because the civic authorities have determined that the disparate impact of enforcing the law can no longer be tolerated. Soon Baltimore will have achieved the ghostly status of Detroit, the FUBU (for us, by us) metropolis that can no longer be mentioned in polite society.

Albert Jay Nock (e-books available here free) posed the following question in his Memoirs of a Superfluous Man (1945), “Did the average European in the last half of the fourth century know that the Dark Ages were closing in on him?”

I rather doubt it. Probably he took the overspreading of ignorance, corruption, violence and bestiality as being pretty much the regular thing, and evading or warding off their impact was merely so much in the day’s work.... In all likelihood the man of the Dark Ages did not recognise symptoms, or know what they meant, or pay any attention to them. Indeed, how could he? Knowing no history, he could not understand history, and so he had no rule of comparison by which to measure the quality of his civilisation and determine whether it was changing for the better or the worse. The tide-gauges set up by Lucilius, Juvenal, Horace, Persius, Tacitus, may as well not have existed, as far as he was concerned.

James LaFond chronicles Baltimore’s encroaching Dark Age in real time. I commend him to you.