I love Sarah Palin’s word coinage of “Cantor” as a verb meaning to primary a Republican who has become an anti-American establishment hack. On CNN Sunday morning, she pledged to support Paul Nehlen, an independent businessman who is running against Speaker Paul Ryan.

JAKE TAPPER: So, Governor, as you know, Speaker Ryan told me on Thursday that he is not ready to support Donald Trump. Now, one of Trump’s spokespeople told CNN that if Ryan does not back Trump, he should not be speaker of the House. What do you think?

SARAH PALIN: I think Paul Ryan is soon to be Cantored, as in Eric Cantor. His political career is over, but for a miracle, because he has so disrespected the will of the people. And, yes, as the leader of the GOP, the convention certainly, he is to remain neutral. And for him to already come out and say who he will not support was not a wise decision of his.

You know, I think why Paul Ryan is doing this, Jake, is, it kind of screws his chances for the 2020 presidential bid that he’s gunning for. If the GOP were to win now, that wouldn’t bode well for his chances in 2020, and that’s what he’s shooting for.

So, lot of people, with their never Trump or not right now Trump mantra going on, they have their different reasons. I think that one is Paul Ryan’s reason.

TAPPER: Well, specifically, when you talk about him being Eric Cantored, Eric Cantor was the House majority leader who was challenged in the primary by a conservative candidate who got a lot of grassroots support, and that was a big surprise.

Paul Ryan is facing a challenge in the Republican primary in Wisconsin. The primary is coming up. It’s August 9. The candidate is — I believe his name is Paul Nehlen. Are you planning to support his challenger?

PALIN: Well, that’s a good question, seeing as I haven’t even got to call him and tell him that I’m supporting him.

But, yes, I will do whatever I can for Paul Nehlen. This man is a hardworking guy, so in touch with the people. Paul Ryan and his ilk, their problem is they have become so disconnected from the people whom they are elected to represent, as evidenced by Paul Ryan’s refusal to support the GOP front-runner that we just said he’s our man.

And what Paul Ryan and his ilk, again, their problem is, they’re — they feel so threatened at this point that their power, their prestige, their purse will be adversely affected by the change that is coming with Trump, and with someone like Paul Nehlen that they’re not thinking straight right now.

So far, these leading Republicans have not gotten the message that the citizens are sick and tired of elites running America into the ground. Since the top GOPers are untrainable, they must be voted out.

House Majority Leader Eric Cantor’s stunning loss to newcomer college prof Dave Brat in a 2014 primary was a political earthquake that signalled the revolt against the Republican oligarchs that continues today. Professor Brat campaigned hard against Cantor’s support for amnesty, and Congressman Brat has scored an A+ grade from NumbersUSA for his first term activity. Win, win. Bad guy out, good guy in. 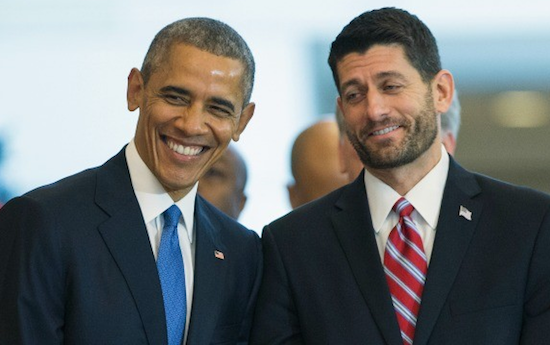 Paul Ryan is a stubborn supporter of amnesty for illegal aliens and his first budget as Speaker gave Obama everything he wanted to further grease the wheels of immigration against Americans.

On Friday, Ann Coulter remarked that Paul Ryan is “the next Eric Cantor” on Bill Maher’s Real Time show. When Maher claimed that Ryan is the head of the Republican Party, Coulter responded, “No he isn’t, he is so hated by the base. . . He is absolutely hated, he’s the next Eric Cantor, who was the highest member leadership ever to lose in a primary.”