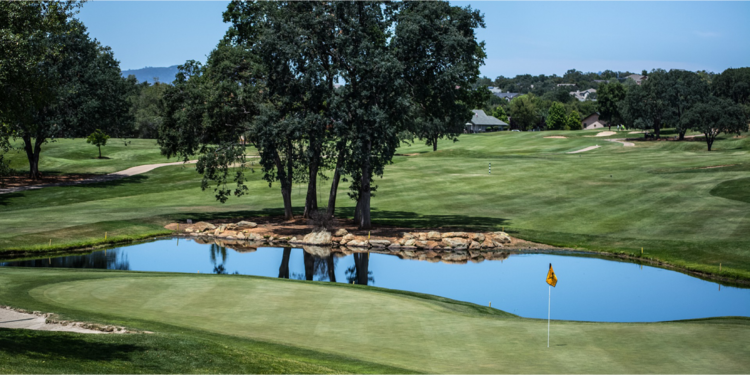 While the world of architecture increasingly evolves toward in-your-face buildings designed by starchitects like Thom Mayne, the high end of the world of golf course architecture has been evolving in the opposite direction, toward WASP understatement. The most prestigious new golf course of the 2010s, for example, is Old Macdonald, the fourth course at Bandon Dunes on the coast of southern Oregon. It's a tribute by golf designers Tom Doak and Jim Urbina to the first great American golf architect, Charles Blair Macdonald, who built the National Golf Links of America in the Hamptons a century ago. I haven't played Old Macdonald (although I have played the NGLA four times).  I have to admit to being fairly baffled by pictures of this new course, which looks at first glance more like a rumpled sheep ranch that a $275 per round (high season) resort golf course. (Here's an in-depth guide to the course.) In contrast, here's the 17th, the Garden of Eden hole, at Shadow Creek outside Las Vegas, which may have been the high point of trends in golf architecture 20-25 years ago. At Shadow Creek, you can see where you are supposed to hit the ball at a glance, in contrast to Old Macdonald which (like St. Andrews) seems featureless at first glance and extraordinarily complex upon careful study.

Shadow Creek was designed by Tom Fazio, one of the first golf architects whose names end in a vowel, with a lot of good advice from casino magnate Steve Wynn, whose expertise in showmanship and pacing was a revelation for golf course architects. They dug a 60 foot deep hole in the desert of more than half a square mile, then reproduced a fantasy  version of the the Sand Hills of North Carolina. Today, in contrast, the emphasis is on finding the perfect piece of golf land (i.e., sand dunes), no matter how remote, and then routing upon it a course that looks like no dirt was moved in creating it.