Germany Wins World Cup, a Controversial Call, and Favorite Sports of the World 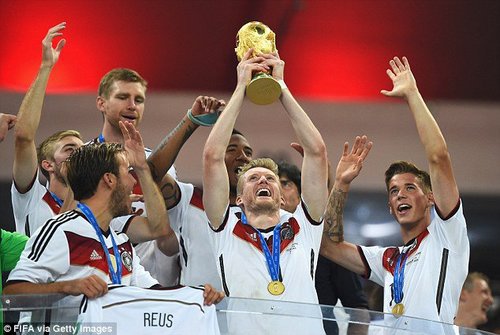 I wrote three columns for Mexidata.info about the World Cup. The articles focus on the Mexican soccer team, but also contain plenty of general information about the World Cup (which is a one-month tournament involving 32 national teams) and how it works. The columns are here, here and here.

The focus of my VDARE.COM article on the World Cup was on fans of the Mexican national team, many of whom reside in the United States. Many of these fans, including U.S.-born Mexican-Americans, flew to Brazil to cheer on Team Mexico. See Guess Where Mexico's World Cup Fans Came From?

In that article, I reported Mexico's loss to the Netherlands on June 29th, which eliminated Mexico from the tournament. I wrote that "...Team Mexico was eliminated by Holland in a game with a questionable call." I should have written "a game with a controversial call."

What happened is, Mexican player Rafael Marquez received a foul for tripping Dutch player Arjen Robben. The Mexican coach and fans thought it wasn't a foul, and Mexicans went on and on about it on social media. At least one pinata of Arjen Robben was spotted on a street in Mexico.

Later, after watching videos of the incident, and having seen still photos of it, it looks to me like Marquez did trip Robben. Of course, Robben exaggerated his fall by "diving" or "flopping", but that doesn't change the fact that he was fouled. After all, over-dramatizing and exaggerating is a part of professional international soccer.

The Mainstream Media lectures Americans as to how soccer is the world's game, and that Americans are provincial or even racist if they're not soccer fans.

So there are plenty of people worldwide whose favorite sport is not soccer, it's not just Americans.