Germany Will Require Migrants to Learn the Language

After it became clear that Chancellor Merkel’s welcome to millions of Muslim foreigners has been a disaster that threatens all of Europe’s safety, the government is scrambling to look like it is doing something. First on the revised to-do list is to insist that newbies learn to speak German — so rapefugees will understand when Frauleins say Nein.

German teachers can’t be happy about facing even more obnoxious students than they already have. Foreigners forced into classrooms will likely be twice as difficult as the usual violent Muslim boys.

And make no mistake: German schools have already had a rough time with young Muslims who don’t respect teachers or learning.

In 2006 things were so bad in a diverse Berlin high school that teachers wanted it shut:

Suddenly, teachers at Berlin’s Ruetli school decided enough was enough. They would no longer tolerate being spat at, insulted and attacked by pupils, some of whom spoke hardly any German and many of whom carried knives.

Things had deteriorated to such an extent at the state school – in a district where 80 per cent of pupils are from Muslim immigrant families – that it had become virtually impossible to teach, and some staff feared for their lives. At the end of their tether, staff wrote to the authorities pleading for the school to be closed. . .

Here’s a video of the conditions at the time at the Rutli school:

Below, a Muslim student at Rutli flashes a knife during a media interview. 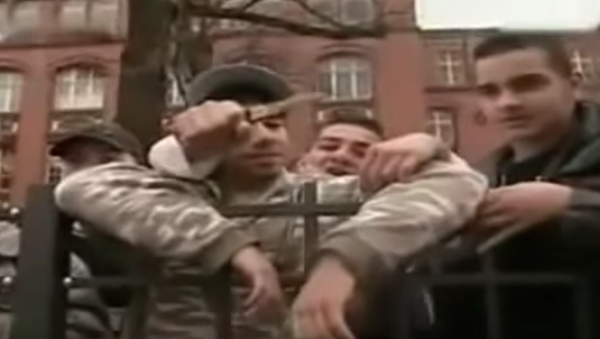 But there is a happy ending — if spending $35 million to fix one foreigner-infested school can be considered a success. A gigantic infusion of money plus extensive rejiggering of the school seems to have worked — for now.

A decade ago, the Ruetli school in Berlin’s Neukoelln district became a symbol of all that was wrong with Germany’s integration of immigrants.

Its teachers begged city officials to shut it down because of violence. Hooded students were filmed pelting police and reporters gathered at the school’s entrance with cobblestones.

Today, Ruetli is transformed and the scenes from 2006 a distant memory. Some 33 million euros ($35 million) in public money have been pumped into the school over the past few years and the widow of former German president Johannes Rau is a patron.

Violence is down sharply and a gleaming new event hall houses art exhibitions and a state-of-the-art gymnasium.

For wealthy Germany, which faces a mammoth challenge to integrate and educate hundreds of thousands of refugees – many of them fleeing war in Syria, Afghanistan and Iraq – the radical remake of Ruetli is an example of what is possible if politicians embrace the task with commitment and resources. . . .

The experience of mixing Muslims and education so far is not promising, but Merkel has gotten Germany in a terrible pickle, and they have to try something. This “requirement” sounds pretty slim. Merely learning to speak German will not turn allah’s gangsters into civilized persons.

As Lee Kuan Yew, the architect of modern diverse Singapore, observed, “I would say today, we can integrate all religions and races except Islam.”

MIGRANTS in Germany will be required by LAW to integrate and learn the country’s mother tongue or face getting deported, according to planned legislation.

German Interior Minister Thomas de Maziere said he is intending to implement a new law that will require migrants to learn German and be part of society – or lose their permanent right of residency.

Many people in Germany have turned their backs to Chancellor Angela Merkel following her open-door refugee policy and turned towards the anti-immigrant party Alternative for Germany.

The Alternative for Germany party (AFD) has developed an anti immigration stance over the past year, the party has made huge gains in popularity since the refugee crisis hit the EU and the group powered into three state legislatures.

In Saxony-Anhalt, the AfD secured almost 25% of the vote, putting them in second place ahead of the left wing Social Democrats (SPD) and the extreme left wing party literally called “The Left” (Die Linke).

Around one million migrants arrived in Germany last year, and around 100,000 more have arrived so far this year.

Although Germany opened migrants with open arms, many citizens are now angry at this response following migrant sex attacks.

Immigrants were responsible for the sex attacks in Cologne on New Year’s Eve when gangs of them robbed and molested hundreds of women.

In January, following the Cologne sex attacks, the German chancellor promised to give authorities more powers to crack down on migrants who commit crimes, including deporting them.

Chancellor Merkel has performed a u-turn on her stance with Syrian and Iraqi refugees, saying that they will have to leave Germany once Islamic State (ISIS) has finally been defeated.

The Interior Minister believes that there should be a link between successful integration and the permission to stay longer in Germany.

Speaking about the planned law, Vice Chancellor Sigmar Gabriel said: “We must not only support integration but demand it.”

Germany saw a net migration influx of 1.1m people in 2015, which is the largest influx since the Second World War.