Germany's Chancellor Merkel Is in Denial about Muslim Invasion

It’s disconcerting to see Europe turning up the speed on its self-inflicted destruction by allowing even more Islamic aliens to enter. Muslims keep coming because Europe keeps admitting them, rather than turn them back at the borders or at sea as Australia has sensibly done. Normal warfare in Islam societies is not Europe’s problem and Europeans are creating a deadly precedent.

Zero Muslim immigration should be the top priority of Europe, not adding more dangerous residents. Authorities admit they cannot keep track of likely terrorists now, so adding hundreds of thousands of unidentified strangers is terrible folly. The recent close call on the train should be a reminder as well as the slaughter of Charlie Hebdo staffers.

Germany is a popular destination, judging by the numbers. The country expects to get 800,000 asylum seekers this year, a quadrupling from last year. Given that the citizen population of Germany is around 81 million now, 800K additional residents would be 1 percent of the number of the whole country. Just the sheer number is daunting, even without the unfriendly culture and history of Muslims toward Europeans. Plus, there is the certainty that dedicated jihadists are using the open borders chaos to infiltrate.

A number of the illegal aliens are Syrians (92% Muslim), who may be legitimately called refugees because they are fleeing the war there. However, many are economic opportunists from all over Africa and as far east in Asia as Afghanistan. Syria has a population of 23 million and Africa has around 1.2 billion.

The illegal aliens won’t be treated with the deference they feel due, but it will be better than bombed-out Syria, and many will tell their whole families to come for Europe’s generous freebies. Why won’t tens of millions come? As long as Europe continues its insane policy of welcoming historic enemies rather than repelling them, they will continue to travel thousands of miles in hopes of a free first-world lifestyle.

Here’s a sappy BBC report about Syrians traversing Macedonia, but it gives a hint of the unruly crowds and how needy they are. Some of those kids will grow up to be jihadists in the heart of Europe.

Below, some of the Syrians heading to northern Europe, who are not happy with the treatment they are getting. 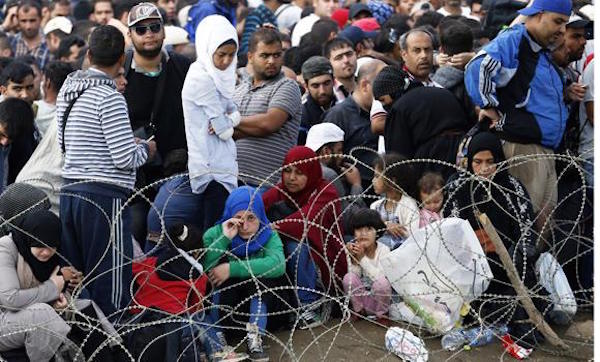 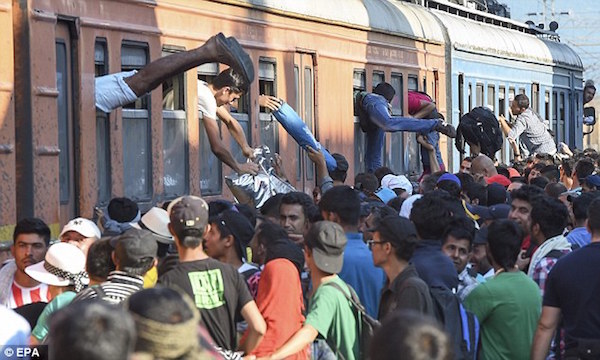 German Chancellor Angela Merkel is talking crazy, saying that Germany won’t be overwhelmed by 800,000 demanding Muslims. This could end very badly, particularly with such an unrealistic attitude on the part of Merkel.

Interior Minister Thomas de Maiziere said that his government would not be fazed by an estimated 800,000 asylum applications by the end of 2015:

“This is a challenge for all of us, [but] Germany is not overwhelmed.”

Germany has seen a wave of migration over the last year from the Middle East, the Balkans and Africa.

It has repeatedly had to raise its projections over the number of people seeking asylum.

Earlier this year it forecast that about 450,000 asylum seekers could arrive in 2015, but on Tuesday it warned that the figure could rise to as many as 750,000 this year – a figure which it again raised to 800,000 people on Wednesday.

It is thought that Germany is attractive to migrants because it is the EU’s most populated country and has a strong economy.

Chancellor Angela Merkel cautioned over the weekend that the asylum issue could become a bigger headache for the European Union than the Greek debt crisis, and that a co-ordinated response was required from Brussels.

Figures released by Mr de Maiziere on Wednesday revealed that :

? In July, asylum applications to Germany rose 5.1% from June to 34,384 – nearly double the number from a year ago

? Until July 2015, Syrians were top of the list of asylum seekers, with 44,417 applications received, almost three times that of the same period last year

? Applications from the Balkans comprised about 40% of applications so far in 2015

While Mr de Maiziere said that while all refugees would be “decently accommodated”, the rise in applications from the Balkans was “unacceptable” and “an embarrassment for Europe”.

Germany has recently begun broadcasting TV public service announcements in Balkans countries, urging people not leave home and warning them that if they are found to have left for economic reasons, they will have almost no chance of successfully applying for political asylum.

German towns have been housing refugees in tent cities and converted gyms, but as tensions increase, there has been a rise in attacks on asylum seekers.

In the east, thousands of people have marched in towns and cities in protest at asylum seekers being housed in their areas and against what they call the “Islamisation of the West”.