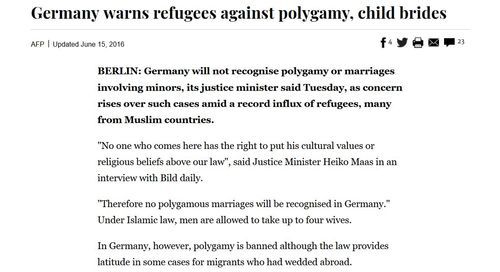 The German justice minister announced on Tuesday that the nation would no longer ignore child marriage and polygamy amongst its invasive new residents from the Middle East.

Up to this point, Germany has been taking it on the chin by allowing the influx of more than a million Muslims over the past year who bring a violent culture, one which also permits polygamy. As a result of multiple wives, some “families” have more than a dozen children whose upkeep often falls upon the citizen taxpayers.

Now the justice minister says that German law will apply equally to all residents. We will see how that stands up to the inevitable Muslim and liberal pushback.

BERLIN: Germany will not recognize polygamy or marriages involving minors, its justice minister said on Tuesday, as concern rises over such cases amid a record influx of refugees, many from Muslim countries.

“No one who comes here has the right to put his cultural values or religious beliefs above our law,” said justice minister Heiko Maas in an interview with Bild daily. “Therefore no polygamous marriages will be recognized in Germany.”

Under Islamic law, men are allowed to take up to four wives.

In Germany, however, polygamy is banned although the law provides latitude in some cases for migrants who had wedded abroad. For instance, if a man dies leaving two wives, a court could take into account their de facto relationship, which is bigamous under common law, when distributing the inheritance.

But Maas wants to end the ambiguity, saying: “Everybody must abide by the law, no matter whether he has grown up here or has only just arrived. The law applies equally to all.”

Likewise, the justice minister said cases of marriages involving a minor should also be outlawed, for fear that the underaged individual has been forced into marrying. “We cannot tolerate forced marriages, above all, if they affect under-aged girls,” Maas said.

According to Unicef, child marriages — where at least one spouse is under 18 — account for 40 per cent of all marriages in Afghanistan, from where one of the biggest groups of recent refugees to Germany come.

Bild reported that the southern state of Bavaria has recorded 161 cases of asylum seekers with spouses who are under 16, and 550 cases of marriages involving under-18s. In neighbouring Baden-Wuerttemberg, 117 cases of child marriages were registered among newly arrived migrants, while in the populous state of North-Rhine Westphalia, at least 188 such cases with under-aged girls had been recorded.

The state of Hessen meanwhile reported that in 2015 and 2016, it had recorded an increasing number of cases of “refugees from Arab countries who are married with minors”.

A justice ministry spokeswoman said on Monday she did not have nationwide data, but stressed that “child marriages are not accepted in Germany, and they will not be recognized”.

Germany opened its doors to 1.1 million asylum seekers in 2015, and is facing the daunting challenge of integrating the newcomers into society.