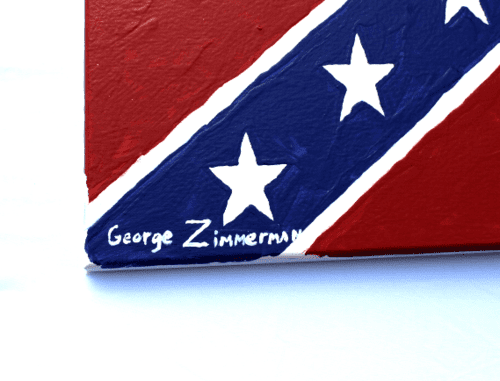 The Age of the Troll is upon us.

The man who killed Trayvon Martin is now selling Confederate battle flag art and expects to raise a six-figure amount for his own legal defense and that of a Florida gun shop owner who declared his establishment a “Muslim-free zone.”

George Zimmerman has joined Florida Gun Supply to sell signed and numbered prints of a painting he did of the Stars and Bars with the words in the quadrants “The 2nd / protects / our / 1st.”

Of course, what else can George Zimmerman do for a living? He has notoriety but is essentially unemployable, the worst possible combination. Essentially, this is the only thing he can do to make money.

The Florida Gun Shop is currently being sued by CAIR because the owner declared his store "Muslim free" and he now needs to pay his legal defenses. We used to call this freedom of association, which was once defended by Rand Paul, before he retreated when people yelled at him. Now, even making a declaration like this is enough to destroy you.

“A percentage of the proceeds will also go directly to the Boys and Girls Club to help support the next generation!” Florida Gun Shop said.

Mr. Zimmerman has sold an original painting before — “an unflattering portrait of prosecutor Angela Corey,” according to TMZ — for more than $100,000.

The gossip site suggested that “it’s a good bet this more controversial painting could be worth the same.”

What can we take from all this? As political correctness intensifies, and even becomes government policy, more and more people will react against it simply to be contrarian. These is now becoming a kind of economic niche in its own right. Think of all the small flag makers that received huge amounts of money when they became the only people selling Confederate flags after Amazon stopped. (You can receive your own here as a reward for donating to VDARE.com)

Zimmerman is just taking this to the greatest extent possible. What other choice does he have?