George Hawley's Predictions Pretty Much On The Money

The polls might've struck out on the 2016 presidential election, but at least one Alabama political science professor was almost 100 percent correct in guessing the outcome.

George Hawley, an assistant professor of political science at the University of Alabama, guessed 48 states correctly during a prediction of the election's outcome last week.

Hawley was the only one of 22 faculty and graduate students within the Department of Political Sciences to guess a win for President-elect Donald Trump. Everyone else predicted a victory for Democrat Hillary Clinton."People thought it was an unlikely scenario," Hawley said about Trump winning. "I wasn't dead certain it would be the case, either. But I've been making this point since my second book came out that if the Republican Party has a future, it lies in the upper Midwest. That may end up being the case."

Hawley missed only on two states – New Hampshire and Michigan.

Trump won Michigan with 47.6-47.3 percent differential, a stunner in a Democrat-leaning state that overwhelmingly supported Barack Obama in 2008 and 2012.

“I thought (Trump) would do well there, and outperform previous Republicans, but I didn’t think he’d turn out enough people,” said Hawley. “Turns out, I was mistaken.”

“I thought there was evidence it would lean more red than it did,” Hawley said.

North Carolina and Florida, also both swing states, went with Trump. That was no surprise to Hawley.

“The fact (Republican Mitt) Romney was able to win North Carolina (in 2012) indicated to me that it was probably not going to swing back into the blue camp,” said Hawley. “Florida, I thought, was going to be a lot closer than a lot of people thought because of what I perceived to be an enthusiasm gap between the two candidates.” 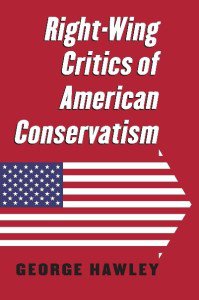 Hawley said he's not prepared to tilt his research toward political predictions and polling. He joined the department in 2013, and has written several books including one released in February entitled "Right-Wing Critics of American Conservatism" which focuses on the history of the American right since 1945.

He said that polling is becoming increasingly difficult, especially with conservative voters.

“It turns out that we can say that we are now seeing a trend following the Brexit result (in Britain) earlier this year that when you have these types of questions that relate to right-wing populism which is the Trump phenomena … it’s very difficult to gauge,” said Hawley. “People aren’t giving accurate answers.”