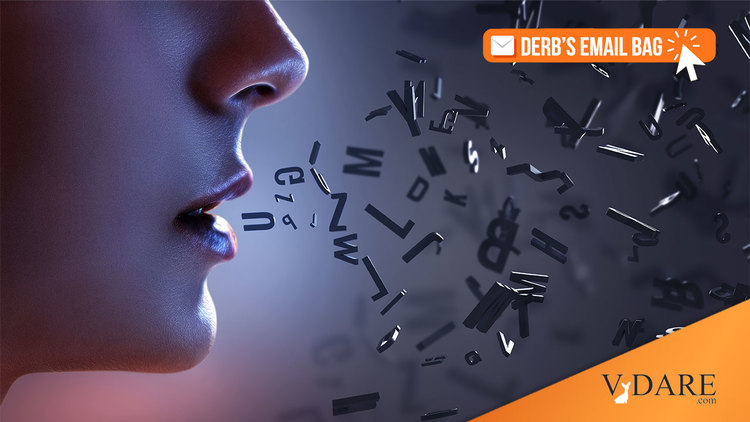 Brainteaser solution.  The worked solution to the Math Corner brainteaser in my May Diary is here.

Yes, I agree, it was a hard one: not so much a brainteaser as a brainvexer, if not a braintormentor. I flatter myself that my solution is at any rate easier for a layman to follow than the one offered in Peter Winkler's Mathematical Mind-Benders  (p.115), or the similar one in the May 2022 issue of American Mathematical Monthly (p.495).

Ticketed by the Pronunciation Police.  For some reason they have been targeting Radio Derb recently.

In your most recent Radio Derb, you referred to "a 911 call," but you pronounced it as "nine eleven." While that pronunciation isn't wrong, it makes one think of the terrorist attack in 2001. The emergency number should, of course, be pronounced "nine one one."

And two different listeners objected to my "shitso-" pronunciation of "schizophrenic." It should be "skitso-," they tell me.

Should it? Confronted with a "sch"—other than in long-established English words like "school"—I fall back on my early training in German, where every "sch" is a "sh."

In any case, having already made it plain that I regard what passes for mind science in our current state of understanding as a heap of doggie-doo, I think the "shitso-" pronunciation of "schizophrenic" is more apt.

Fire arrows.  The Usage Police have been after me, too.

Sorry to nitpick, but you fire a gun because the powder has to be ignited. Not so with arrows, unless they are of the flaming variety.

My goodness, that is a nitpick! It is also one I can refute with some confidence.

In my youth in England I spent several months in the service of a local Baron shooting fire-arrows into the thatched roofs of cottages belonging to unruly peasants. Discharging an arrow from the bow we always spoke of as "firing"; igniting the flame-bearing portion of the arrow we referred to as, duh, "lighting."

The earworm mystery.  My June 3rd signoff left some listeners baffled. What was so special about the number 77 that it gave me an earworm? they're asking.

Beats me. The only special things I can find about 77 are

Those interesting facts aside, I can't think of any reason why my unconscious mind was obsessing about 77 on June 3rd 2022. No idea. No clue. Sorry!

Was Freud the Columbus of mind science? Speaking of the unconscious, I've had things to say recently  about how little we understand the human mind.

A reader of Nicholas Meyer's books recalls that in an afterword to one of them Meyer quotes his father, a psychologist, as comparing Freud to Columbus—that no serious mental health professional takes anything Freud says seriously, but without Freud, we wouldn't even know there is a subconscious—just as Columbus believed, to his dying day, that he'd landed in Asia, and so was dead wrong in basically everything; except that it was Columbus who actually got on the boat, and without that…nothing.

With all proper respect to Nicholas Meyer's Dad, I find that hard to swallow. Homo sap. has been closely observing itself for a quarter million years. The idea that we, and I my precious self, often do things without having any conscious motivation, must have occurred to people long ago. ("The Devil made me do it!")

Googling around, I see that the philosopher Lancelot Whyte  wrote a book about this 62 years ago: The Unconscious Before Freud

Freud deserves some low level of credit for having tried to figure out the structure of the unconscious; but, as my correspondent says, nobody any longer thinks his theories are correct.

Martin Gardner said of Freud that where Freud was sound "he was not original, and where original he was mistaken." I think that sums up the good Doctor very neatly.

The Word Kidnappers.  In my June 3rd podcast I grumbled about the homosexualist lobbies having kidnapped the word "pride." A listener reminds me of their earlier and much greater crime: kidnapping the word "gay."

That happened so long ago it seems fussily antique to still be bothered about it. We should be, though. There's been a real loss of meaning there.

Sure, the thesaurus offers lots of synonyms for "gay" in the old meaning: cheerful, colorful, convivial, festive, happy, showy,…  None of them captures the meaning precisely, though. ("Full of or disposed to joy and mirth; manifesting or characterized by joyous mirth; light-hearted, exuberantly cheerful, sportive, merry."—OED.) And yes: I know that in low-class British street slang at least as far back as the 1850s the word was used for fallen women.  That usage was not current among people who were not low-class street-frequenting Brits, though.

It's probably too late now to save "gay," but we can still push back on behalf of "pride."