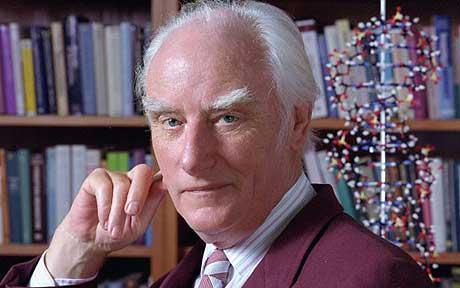 Francis Crick On Science And IQ

Steve Sailer has a post, too long to reproduce here, about how Francis Crick, James Watson's DNA partner, was of the same opinion as James Watson on race and IQ—here's a letter Crick sent to John T. Edsall, who had signed an anti-William Shockley letter. You'll see that he was threatening to resign as an overseas associate of the American National Academy of Science:

I have been very distressed to see the letter to the President of the National Academy by you and six other Academy members regarding a Proposal by Dr. [William] Shockley [Nobel laureate in physics]. Like you I have not published anything on the population problem, but f have become fairly familiar with the literature of the subject. I have also talked to Dr, Jensen when he visited the Salk Institute recently.

Unlike you and your colleagues I have formed the opinion that there is much substance to [Berkeley psychologist Arthur] Jensen’s arguments. In brief I think it likely that more than half the difference between the average I.Q. of American whites and Negroes is due to genetic reasons, and will not be eliminated by any foreseeable change in the environment. Moreover I think the social consequences of this are likely to be rather serious unless steps are taken to recognize the situation.

While any present conclusions are tentative, it seems likely that the matter could be largely resolved if further research were carried out. I should thus like to know two things. Would you and your colleagues please state in detail why they think the arguments put forward by Jensen are either incorrect or misleading. Secondly, would they please indicate what research they think should be done to establish to what extent "intelligence" is inherited. This is surely the important point, and is equally valid for a country without a racially mixed population.

The most distressing feature of your letter is that it neither gives nor refers to any scientific arguments, but makes unsupported statements of opinion, This, I need hardly remind you, is politics, not science. The voice of established authority, unsupported by evidence or argument, should have no place in science, and I am surprised to find that you, of all people, should put your name to a letter of this character written to the Academy on a matter of scientific research. I am cure you will realize that if the Academy were to take active steps to suppress reputable scientific research for political reasons it would not be possible for me to remain a Foreign Associate.

By contrast, as Steve points out, last year no-one stood up for James Watson.