Next to language, food is one the most important cultural significators for human beings. One sees that in immigrant neighborhoods: as soon as the tribe reaches the level where it can support a business, ethnic restaurants and markets spring up. Foreigner moochers will reject even free American food because they want their tribal chow.

For that reason, we can understand foods importance in the Islam vs. the West culture war being played out in France, where cuisine is taken very seriously. French people have taken to the streets to protest Islamic food because they want pork and wine to be readily available and object to halal-slaughtered meat becoming more widespread without being labeled as such.

Below, despite a ban, hundreds of French citizens showed up for a sausage and wine get-together in 2010 to protest the Islamic halal incursion. 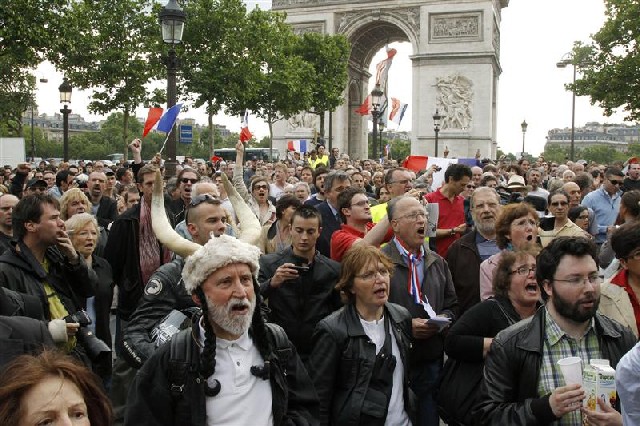 Halal butchery is notoriously cruel, and is based on Mohammeds instructions. Many modern westerners prefer more humane slaughter techniques like the ones developed by Temple Grandin. But the import of Islamic diversity has brought a number of objectionable practices, from honor killing to the barbaric public slaughter of animals in the street.

Muslims dont subscribe to the idea of When in Rome, do as the Romans do because Islam teaches them that they are superior to Christians, Jews, Buddhists, Hindus, etc. So the idea of assimilation is anathema to Muslims immigrants. Europe should therefore stop Muslim immigration and so should America.

Now a recent revelation about the spread of halal slaughter has angered the French people with major elections coming up in a couple months.

(Reuters) A TV documentarys revelation that slaughterhouses around Paris have switched meat production entirely to halal methods has stirred a political storm in France, where attitudes to Europes largest Muslim minority are a subtext in a presidential election campaign.

The France 2 documentary last week said all of the abattoirs in the greater Paris region were producing only halal-style meat, selling some without labelling it as such to avoid the cost of running separate lines for halal and non-halal customers.

Far-right candidate Marine Le Pen who is hoping to win voters away from centre-right President Nicolas Sarkozy ahead of the two-round election in April and May has seized on the issue.

All the abattoirs of the Paris region have succumbed to the rules of a minority. We have reason to be disgusted, Le Pen told a rally in Lille on Saturday, pledging to file a legal complaint.

In a country known for its obsession with the provenance of its cuisine, the issue could play with a wider audience than the far right, including animal rights groups, consumer advocates and food industry professionals.

Some European animal rights campaigners say that the Islamic halal and Jewish kosher rules for ritual slaughter are less humane than standard European practice, because they ban the practice of stunning animals before they are killed.

This polemic requires us to call for more transparency, Frederic Freund, director of a group called Aid to Animals in Abattoirs OABA.L, told RTL radio during a call-in programme.

Halal meat, slaughtered according to Islamic norms, is a booming market in France and growing demand for it on school, hospital and company canteen menus has already caused tension and misunderstandings between Muslims and non-Muslims.

Officials say most of the meat consumed in and around Paris is slaughtered outside the region and much of it still comes from slaughterhouses that use non-halal methods.

The French state is strictly secular, and politicians have intervened against the spread of some Muslim traditions in ways that critics say is populist and xenophobic.

Sarkozy and his predecessor Jacques Chirac both won support among right-wing voters for banning Muslim full-face veils in public and headscarves in school.

Like kosher slaughter, the halal rite requires the butcher to kill the animal by swiftly slitting its throat. Stunning it first to lessen its pain, as recommended in a European Union directive, is not allowed.

Frances large Muslim and tiny Jewish minorities make up only about 10 percent of the population and not all of them eat only meat slaughtered according to their religious traditions.

But eating halal has become an identity marker, especially among younger members of the 5 million-strong Muslim minority. The halal market is now twice as large as that for organic foods and is estimated to grow at 20 percent annually.

This explosion of halal is one of the most significant phenomena in the transformation and identity affirmation of Islam in France in the first decade of the 21st century, wrote Islam expert Gilles Kepel in a new study of Muslim life in the suburbs of northern Paris.

Much of the meat Le Pen referred to would probably not pass muster if checked by strict halal certifiers, because the animal would probably not have been pointed towards Mecca or blessed with a short bismillah (in the name of God) invocation before being killed by a Muslim butcher.

Jean-Francois Hallepee, who heads a group representing local cattle farmers, said it had just conducted a survey in the greater Paris region and found 100 percent of slaughtering is halal.

That keeps the cost of halal and kosher down, he said.

Free the pork chops! Save the sausages! Heres to a non-Muslim France!