To hear the New York Times tell it, mass Muslim immigration does not have to be a problem. It has found a French town (that many Americans have never heard of) Roubaix where the multicultural experiment appears to be going great. As long as French residents there violate the nation’s principle of state secularism (laïcité) and coddle Islamic practices, then no distressing jihadist terror occurs.

Of course, this strategy is not the traditional assimilation of immigrants but submission of the native population to hostile newcomers, a tactic which Islam has perfected during its 1400-year war against all non-Muslims: “Just do things the Koran way, and nobody gets hurt.” As long as Roubaix residents submit to Muslim desires, peace will continue. But the requirements of the Muslims are likely to become increasingly more intrusive with time, such as demands that free speech be curtailed to suit Islam.

There is only one exception to the Times’ pretty diversity picture, which appears in a single down-page paragraph. When a pro-secular group was scheduled to rotate to leadership on a town civic association, the Muslims were angered and left. Muslims believe in Islamic supremacy and don’t like having their wishes thwarted. At 20 percent of the population, Muslims tend to become violently hostile if the host organism does not submit.

Below, Roubaix has welcomed Muslim social institutions like halal butcher shops, which sell meat cruelly slaughtered according to Islamic directives. 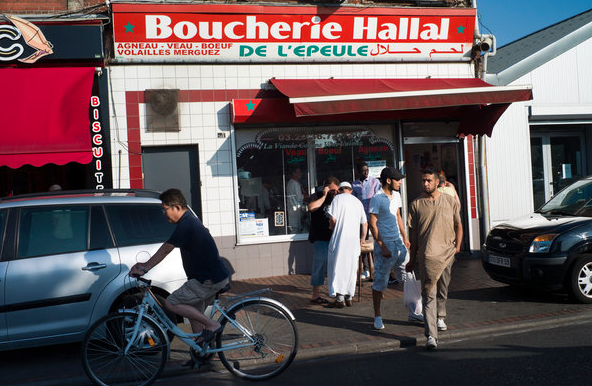 The Times wraps up with a cheerful observation that in Roubaix, a person can be a Muslim and a Christian simultaneously.

Time will tell. The media has proclaimed ideal diversity models before that quickly disintegrated. One example: National Geographic’s Marseille Melting Pot, which devolved with burqa riots a few months later.

ROUBAIX, France — Wearing head scarves and long skirts, the women glide along the faded back streets of this poor French town as they make their way to the mosque to hear the last prayer of the evening.

Like their husbands and brothers, fathers and sons, they feel at home here. That is in large part because Roubaix, a small city in northeastern France, has made a point of embracing its Muslim population, proportionately one of the largest in the country.

“I am comfortable in these clothes here in Roubaix,” said Farid Gacem, the bearded president of the Abu Bakr mosque, who was wearing a nearly ankle-length loose brown tunic on a recent afternoon.

In a country where Islamic head coverings are regulated by law and many Muslims say they have been made to feel like outsiders, Roubaix is one of just a handful of cities that have broken with a rigid interpretation of the country’s state secularism. The city stands out for its effort to take discreet but pointed steps to promote an active Muslim community, and in doing so it has diminished the ethnic and sectarian tensions that have afflicted other parts of France, evident again during the holy month of Ramadan this summer.

In Trappes, a heavily Muslim suburb of Paris, an altercation between the police and a woman wearing a niqab, a veil that is illegal to wear in public, turned violent two weeks ago. In another suburb of Paris, the mayor refused a request by Muslims for a prayer room to use during Ramadan. The Interior Ministry says crimes targeting Muslims have increased 28 percent this year.

Yet here in Roubaix, the mood is different. That is despite one of the worst unemployment rates in the country, 22 percent, with the figure far higher among young people, according to the mayor’s office. Nearly half of households have incomes below the poverty line, and many areas are troubled by petty crime and drug trafficking.

The question is whether Roubaix’s approach to multiculturalism will become a model for other French cities, or if, in a country in which the Muslim population finds itself at the center of a debate over racism, religious tolerance and national identity, it will remain an exception.

“Roubaix is a cradle, a symbol of immigration,” said Muhammed Henniche, secretary general of the Union of Muslim Associations of Seine-Saint-Denis, a Paris suburb, who has looked at the approaches taken by different municipalities.

“Roubaix is representative of living in harmony in terms of immigration,” he said.

The reasons for that approach are hard to pinpoint, in part because of a reluctance by French officials to talk about religion. But among Roubaix’s special circumstances is its long history of immigration, which has included not just Muslims but also Buddhists from Southeast Asia and other groups.

The mayor’s office has taken steps to offer assistance to Muslims here, including finding places to worship. That contrasts with the approach of many French cities that strictly follow the national ethic of laïcité, or state secularism. The city has six mosques, including one under construction, a large number for a city of fewer than 100,000 people. The local government has also allowed the appointment of a Muslim cleric at the city hospital, and three areas of the city’s cemetery are designated for Muslims, a rarity in France.

“When you look at the demographics, in two or three generations, all of France will be like Roubaix,” said Bertrand Moreau, the chief spokesman for the mayor’s office. “There will be a melting pot everywhere, and Roubaix is a laboratory” for how things could work, he said.

The mayor’s office has established a consortium that includes a representative from each of the city’s religious groups, as well as a representative of a group that supports state secularism, so there is a discussion about how to respond to the needs of different groups.

In conversations in the streets and mosques of Roubaix during Ramadan, Muslims made clear that while they face some of the same problems as other French Muslims, they feel that their little city is different.

“Our leitmotif is to live together, and in this living together there’s an image that we wish to give of the Muslim community: that we are French citizens before anything, before the religious aspect,” said Sliman Taleb-Ahmed, president of the association of Muslim institutions in Roubaix.

One of the main Muslim neighborhoods here, L’Epeule, is just a few blocks from the central plaza, making it an integrated part of the city’s life. The street is lined with halal butchers, and the Safir bookstore does a brisk business in offerings about the Koran.

Ahmed El-Hadi, a 15-year-old who runs the store when his parents are out, wore a T-shirt that said in English: “I’m Muslim, Don’t Panic.”

Still, there are tensions. An ecumenical civic group, Roubaix Espérance, which promotes multiculturalism, has a rotating presidency, but this summer it appointed the head of a group promoting laïcité, angering Muslims who thought it was their turn to take the presidency. The Muslims decided to leave the organization.

And yet the separation between Muslims and non-Muslims blurs here.

In the Muslim section of the graveyard in Tourcoing, a nearby town, Josiane Derenoncourt, 65, was the first visitor on a hot summer morning. She came with a bottle of water to put on the grave of her husband of 33 years, Mokhtar Farah.

“I have heard there is a heat wave coming, and I was worried he would be thirsty,” she said, her eyes filling with tears.

She had been Christian, her husband was Muslim, and they met while working in the now-closed textile factories. She converted informally, learning to pray in the Islamic way and sending their only son to a mosque.

“I am glad he is buried here,” she said of her husband, adding that otherwise they would have sent his body to his village in Algeria, where she would not be able to visit.

Is she Christian or Muslim? In this corner of France, she can be both.