Demography is merciless, as we well know in Mexifornia. France is facing a presidential election, and Muslim immigrant voters may tip the prize to the socialist candidate, a diversity-friendly leftist.

France has had a terrible immigration experience, even considered in a European context, that it’s amazing the multiculti racket still has any appeal at all. Muslim “youth” engaged in a major civil insurrection in 2005 that lasted for weeks in dozens of cities and caused enormous destruction of property.

More recently, a Muslim named Mohammed Merah murdered seven people in March, so it’s not like the friends of Allah are becoming better behaved.

The anti-democratic anti-western anti-women culture of Islam makes Muslims a very poor fit for immigration to Europe and America, a fact that is not going to change.

Below, Muslims residing in France burn the flag of their adopted nation. 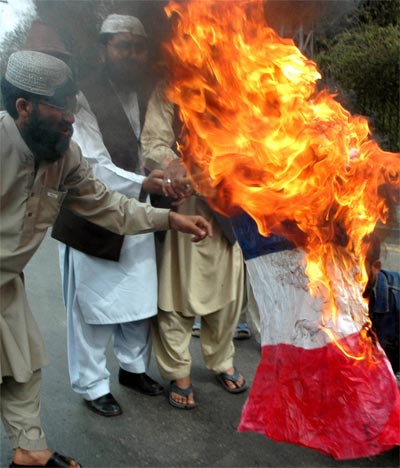 Hostile Muslims say they are “fed up” with all the criticism from Sarkozy and Le Pen. They want the diversity appreciation and permissiveness that only the far left can provide.

PARIS — France’s Muslim community is mobilizing voters to reject President Nicolas Sarkozy in Sunday’s election to punish the conservative leader for his anti-immigrant and anti-Islam rhetoric.

“[French] Muslims can’t stand it anymore. They are fed up with these debates about national identity, halal meat, the veil or fundamentalism all over the place,” said Francoise Lorcerie, a sociologist with the Institute of Studies on the Arab and Muslim World near Marseille.

“The terms [Islam, immigration and fundamentalism] are being used interchangeably, without care, with people being targeted, denigrated and used for [votes].”

The debates and rhetoric aren’t new and have been at the heart of French political campaigns for the past decade.

Muslims – especially those living in the “banlieues,” France’s poor immigrant suburbs – sometimes have been courted by candidates with promises of jobs and better living conditions, but they mostly have been stigmatized as threats to the French identity, analysts say.

The rhetoric escalated last month after Mohammed Merah, a French-born Muslim who claimed to be inspired by al Qaeda, killed seven people in a shooting spree.

Mr. Sarkozy, of the conservative Union for a Popular Movement (UMP) party, called for tightening immigration because there are “too many foreigners” in France.

Marine Le Pen, the presidential candidate of the far-right National Front party, talked about “green fascism” (a reference to the color of Islam) and wondered “how many Mohammed Merahs are arriving on boats and planes each day, filling France with immigrants.”

In the banlieues
The speeches infuriated French Muslims and reignited the debate over origins and identity. As Europe’s largest Islamic community, French Muslims account for as much as 10 percent of the country’s 65 million people.

“Merah was born in France. He did not come by boat or plane, but everyone talks about his origins, despite his being French,” said Mohamed Mechmache, president of AC Le Feu, a community association working to improve conditions in the banlieues. “The French Republic has not been fair: She has forgotten some of her children.”

Mr. Mechmache says what residents of the banlieues really need are education and jobs, not a fight over Islam: The youth unemployment rate is above 45 percent in some of the neighborhoods.

In November, AC Le Feu launched an initiative to warn candidates about addressing the situation in these districts. It is working with Muslim community groups to get out the “Muslim vote” in the banlieues, which have had nonparticipation rates as high as 50 percent in some elections.

“There has been so much disillusion, deception and unfulfilled promises that there is a general climate of mistrust in our neighborhoods,” Mr. Mechmache said. “People say, ‘There is no point voting.’ We tell them they have the opportunity to change things.”

In a notice to its members, the Union of Muslim Families of Bouches du Rhone (UFM13), an apolitical association, asked voters to “punish arsonists … who by calculation and political maneuvers have thrown Muslims, inner-city youths, the unemployed and foreigners to the mob.”

Without mentioning any candidate’s name, the association accused some politicians of dividing the nation and “betraying the republican pact” and warned against “those hoping to win or retain power by stoking fear, xenophobia, the rejection of others.”

The Muslim vote
Muslims have no voting bloc, and political preferences apparently have been based on socioeconomic factors. But activists and researchers say there is an increasing tendency for the community to lean left in support of immigration.

“I prefer the left; I think when you’re born Lamia Messaoui, it can’t be any other way,” said Lamia Messaoui, a French business executive of Algerian descent. “Besides, for me, Sarkozy is not an option. His politics, even when he was the interior minister, his use of borderline expressions such as ‘of Muslim appearance,’ it’s just too much for me.”

In April 2007, polls found that French Muslims voted mainly for the Socialist presidential candidate: Segolene Royal won 64 percent of their vote, while Mr. Sarkozy got just 1 percent in the first round and 5 percent in the second.

“People who would have originally voted for the center or the right-wing are now determined to vote against Nicolas Sarkozy,” Ms. Lorcerie said.

“However, this is a short-term response to the current anti-Muslim craze. In the long run, votes of Muslims and citizens of North African and African decent will eventually blend into the overall trends of the French society.”

For now, French Muslims, like a slim majority of their compatriots, seem to prefer Socialist Francois Hollande: He is the clear front-runner in the runoff on May 6, according to polls.

“Hollande said he will lower rents and bills. That’s what everybody cares about because our salaries aren’t enough to make ends meet,” said Chaker Alain, 28, a Parisian born to French parents of North African descent. “Besides, when you listen to the right-wing speeches, the way they call immigrants and their religion every name, automatically you lean toward the left.”