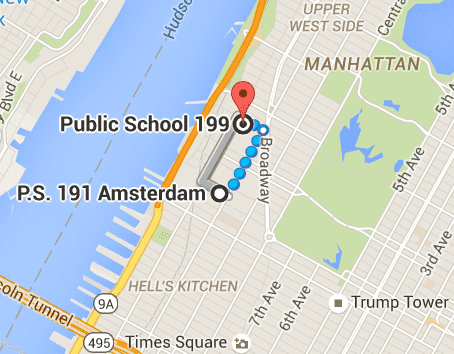 Forget It, Jake, It's Upperwestsidetown—The Elite Plays By Different Rules

On the Upper West Side, though, the rules are different …

It is as though the neighborhood were divided by an invisible wall.

On one side, children attend a public elementary school where test scores are high, the students are mostly white and well off, and the parent-teacher organization can raise $800,000 a year to pay for things like a resident chef.

On the other side, children attend a public elementary school where 87 percent of the students are black or Hispanic and 84 percent receive some form of public assistance. Just over a tenth pass the state reading and math tests. There is no library or art teacher.

The first school, Public School 199 on West 70th Street in Manhattan, is also seriously overcrowded, with a waiting list of nearly 100 children for kindergarten in recent years. The second, P.S. 191 on West 61st, has many empty seats.

Now, to address the overcrowding at P.S. 199, the New York City Education Department is proposing to redraw the line, transferring to P.S. 191 several blocks of apartment buildings where children are currently zoned for P.S. 199. The change would be controversial under any circumstances, but it is particularly so because the state this year put P.S. 191 on its list of “persistently dangerous” schools.

At heated public hearings, some parents on the Upper West Side have said they will move if they are rezoned to what they see as a failing school. Many have expressed resentment that some new buildings under construction would be zoned for P.S. 199 while their own buildings would be cast out. At a public meeting this month, when P.S. 191’s principal tried to speak about how she was addressing her school’s problems, she was shouted at.

The passion is not limited to people whose children attend city schools.

“I’m not a racist — it’s not that I don’t want my children to go to school in a mixed school,” Jared Larsen, who lives in a building that would be rezoned and has two children currently attending private school, said at a recent hearing. “But at the same time we want the best for our children. We want the best for our property value.”

The situation mirrors a rezoning battle playing out in Brooklyn, where the department wants to reduce crowding at a school similar in its demographics and popularity to P.S. 199. There, too, the department is proposing to move some students into a school with a mostly black and Hispanic population drawn from a large housing project. In that case, the department was unprepared for the intensity of opposition, not only from the parents whose homes would be rezoned, but also from current parents at the mostly minority school, who fear that their children will be displaced.

Parents at P.S. 191, which draws many of its students from a nearby housing project, Amsterdam Houses, have been less vocal. Conversations with several of them outside the school on Monday suggested that many did not have accurate information about the rezoning proposal, and that the timing, coming just after the school received the “persistently dangerous” label, had sown confusion and mistrust. The designation is used for schools that have a high rate of violent episodes over a two-year period. …

A report last year by the Civil Rights Project at the University of California, Los Angeles, found that New York City had the most segregated schools in the country.