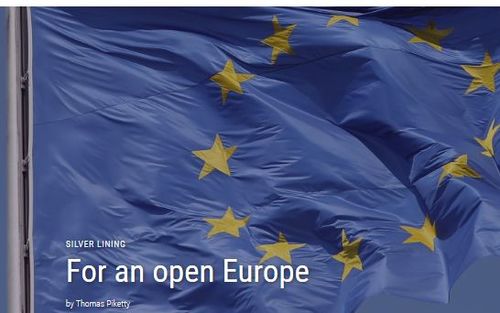 "For An Open Europe": Thomas Piketty Still Not Quite Clear on the Concept of "Inequality"

As I pointed out last year, celebrated French leftist economist Thomas Piketty was sure that criticism of Mexican monopolist Carlos Slim was caused by ethnic prejudice. In Liberation, the French left daily, Piketty continues to remain oblivious to why virtually all billionaires want more immigration:

For an open Europe

Editor’s note: This originally appeared as a column in French in the newspaper Liberation. It has been translated to English by Manu Saadia.

The plight of the refugees is an opportunity for Europeans to jump-start the continent’s economy. Germany’s attitude is a model to follow.

As belated as it may be, these last weeks’ surge of solidarity in favor of refugees has at least the merit to remind not only Europeans, but the rest of the world as well, of an essential reality. Our continent can and must become a great land of immigration in the 21st Century. All conspires to that end: our self-destructive aging imposes it, our social model allows it, and the combination of global warming and Africa’s demographic explosion will increasingly require it.

All this is well-known. What may be less known, however, is that when it comes to migrations, pre-financial crisis Europe was on the verge of becoming the most open region in the world. It is the financial crisis, triggered in 2007-2008 in the United States, and Europe’s inability to overcome it due to its bad policies, that led to the rise of unemployment, xenophobia and a brutal closure of the continent’s borders. All this happened while the international context (Arab spring, refugee influx) should have in fact justified an increased opening.

As of 2015, the European Union counts almost 510 million inhabitants, compared to 485 million in 1995. That increase of 25 million over 20 years is not particularly remarkable in and of itself (a measly 0.2% of annual growth, against 1.2% per year for the world’s population over the same period). The key point is that immigration accounts for almost three-quarters of that population growth (more than 15 million). Between 2000 and 2010, the European Union has absorbed migratory inflows (net of outflows) of 1 million people per year. That is equivalent to the United States’ level, but with a higher degree of cultural and geographical diversity. (Islam remains marginal on the other side of the pond). At that not-so-distant time when our continent knew how to be more welcoming, however relatively, unemployment was on the decline in Europe, at least up to 2007-2008.

So, there was ton of immigration during the Bubble Years. And then the world blew up. You know, maybe there was a … connection?

It’s been seven years, but Piketty doesn’t seem to have learned anything:

… What is to be done? The tragedy of the refugees could be an opportunity for Europeans to rise out of their petty disputes and their navel-gazing. By opening themselves up to the world, by jump-starting the economy and investments (housing, schools, infrastructure), by fighting off deflationary risk, the European Union could easily return to its pre-crisis immigration levels.

In that regard, the openness demonstrated by Germany is excellent news for all those who are worried about a decrepit and aging Europe. One can indeed acknowledge that Germany has but little choice in the matter, given its very low birth rate. According to the latest United Nations demographic projections, even with twice the immigration rate in Germany than in France in the coming decades, the German population would still decrease from 81 million to 63 million by the end of the century, while France would go from 64 million today to 76 million in the same interval.

Funny how Piketty sounds just like The Economist when it comes to immigration.

On a broader issue, there is much debate among economists and other social scientists over whether the economist’s convenient model of Economic Man — self-serving and rational — is realistic or not. But the self-interested Economic Man hypothesis is certainly more realistic for billionaires than it is for most people.