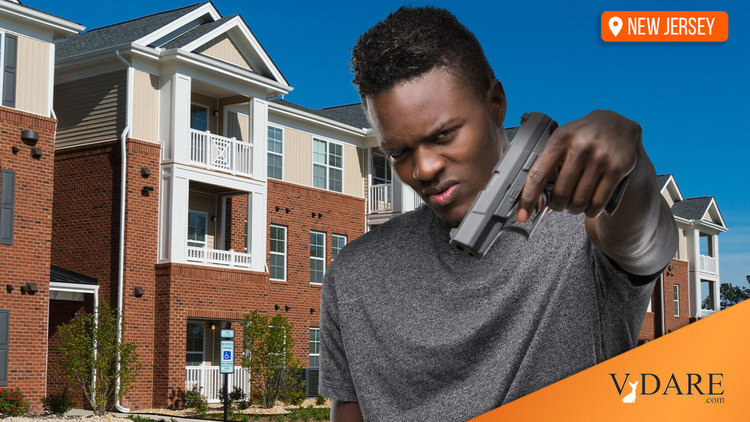 Five NJ Cities—10% Of Population—Had 62% Of Shootings: New Jersey Would Have Virtually No Gun Violence If It Had No Black Population

So if New Jersey had no black population, would the state have any gun violence?

Five NJ cities that account for 10% of population had 62% of shooting victims in 2021, by Joe Malinconico and Steve Janoski, NorthJersey.com, February 22, 2022

New Jersey’s shooting statistics highlight a stark disparity in the way gun violence affects the people of the state, with five major cities enduring a significantly disproportionate share of the pain.

Camden, Jersey City, Newark, Paterson and Trenton account for 10% of the state’s population but had 62% of New Jersey’s 1,412 fatal and nonfatal shooting victims in 2021.

The rate of gun violence for those cities in 2021 was almost 10 times higher than for the rest of New Jersey, according to a Paterson Press and USA TODAY Network New Jersey analysis of state police shooting data.

Activists, crime experts and public officials said they were not surprised by the imbalance in New Jersey’s shooting statistics, noting that the disparity has been a longstanding trend in the state.

Community leaders said they believe the concentration of shootings in the state’s main cities stems from chronic problems that have afflicted urban areas for decades, such as poverty, drug addiction, unemployment, ineffective schools, inferior housing and institutional racism.

Jason Williams, a professor of justice studies at Montclair State University and a Black Lives Matter activist, said structural weaknesses in the inner cities, such as a poor educational system, persistent poverty, the reverberation of the war on drugs and social inequality, have contributed to the surge in violence.

And being raised in a more violent world makes people more prone to be violent themselves, he said.

“You are who you are around,” Williams said. “If you’re socialized into violence, that’s what you become. For me, it’s: How do we erase that?”

The Rev. Allen Boyer, a longtime clergyman in Paterson’s 4th Ward, said too many young people in the city grow up without one or both of their parents.

“They get lost in the crowd on the streets and they get influenced by the wrong people,” he said.

Boyer, who is African American, said racism contributes to the social problems that result in shootings.

“They try to keep us in a certain place where we end up turning on each other,” he said. “Black-on-Black crime is too high. I just don’t understand it.”

Trenton ranks second in per capita shootings in New Jersey, its numbers surpassed only by Camden’s.

“Influx of illegal firearms are probably the biggest factor, which are all too readily available on the street,” said Will Skaggs, a spokesman for Trenton Mayor Reed Gusciora. “This ready supply of weapons combined with historic neighborhood conflicts, increased economic hardship from COVID-19, and persistent mental health and addiction problems have exacerbated this problem greatly.

“Urban centers have always struggled with these issues more than their suburban neighbors, so naturally we have been hit even harder during COVID-19,” he added.

Gusciora, Paterson Mayor Andre Sayegh and Newark Mayor Ras Baraka are part of a group of urban mayors who say New Jersey’s bail reform enacted several years ago made it too easy for people accused of gun crimes to return to the streets while their charges were still pending. That group has been pushing for changes in state law that would keep gun suspects jailed while they await trial.

But how do we blame this on white gun owners?