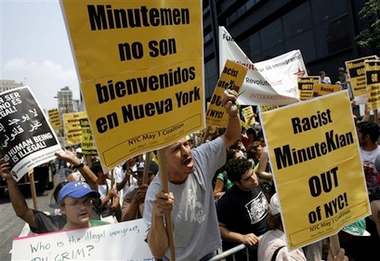 Another signpost in the multicultural poisoning of America is the first national Spanish spelling bee, held Saturday in Albuquerque.

The open-border gang is focused on transforming America into a bilingual nation where Spanish is equal to English, similar to Quebec with French. Their stubborn demands on this issue demonstrate that they are engaged in invasion, not immigration.

One sees the foreign moochers' demands expressed in Spanish on their hostile gimme signs more frequently, which is another message of disrespect as insulting as Mexican flags. Aliens insist on being allowed to live and work here while voicing disgust with our society and system of government.

Predictably, the sponsors of the Spanish spelling bee say they are celebrating multilingualism, but the inability of people to communicate is highly damaging to community cohesion. "Diversity decreases trust," according to Bowling Alone sociologist Robert Putnam, and language diversity is foundational to undermining human relations. Homogenous communities are happier and work better, which is simply a function of the tribal nature of human beings.

In former Governor Richard Lamm's ironic opinion piece "I have a plan to destroy America", the first item on his to-do list is to make the country bi-lingual and bicultural: "History shows, in my opinion, that no nation can survive the tension, conflict and antagonism of two competing languages and cultures. It is a blessing for an individual to be bilingual; it is a curse for a society to be bilingual," he observed.

Polls continue to show that a large majority of citizens expect immigrants to adopt America's language and culture, even after decades of multicultural propaganda from the liberal media.

Finally, the spelling bee was more show piece than competition, since Spanish is a simple phonetic language with little challenge regarding spelling, and participants received in advance a list of the words to be spelled.

Sure, eighth grader Sukanya Roy won the 2011 National Spelling Bee a months ago with "cymotrichous." But could she whip off kanindeyuense", "Tenochtitl??n" or "otorrinolaringologo"?

These are among the list of words that may be used in New Mexico on Saturday, as the National Hispanic Cultural Center hosts the first ever national Spanish Spelling Bee.

"We're celebrating the multilingualism of America," said Daniel Ward, editor of Language Magazine, one of the event's sponsors, in a statement. "We're recognizing that, like most of the world's other children, [our kids will] need more than one language to succeed in our global village."

By the numbers, Latinos would seem to have a leg up in this challenge: According to the Pew Hispanic Center, 33 percent of Latino households speak English and Spanish equally, and 17 percent are majority Spanish-language.

The inaugural bee is being organized by the Alliance for Multilingual Multicultural Education (AMME) and the New Mexico Association for Bilingual Education (NMABE), and is modeled on the latter's 15-year-old annual state Spanish Spelling Bee: Participants will be asked to spell out loud words randomly chosen from a list that had been provided to them beforehand.

From a linguistics standpoint, there's been some snarking that the Spanish bee might be easier than the English one, since Spanish orthography is in general considered simpler. "In Spanish, every letter has a unique associated phoneme, so with very few exceptions, words are written exactly as they sound," wrote the BBC.

The 86-year-old English-language bee has become a cultural phenomenon, inspiring documentaries, books and international attention. This year, the battle between 275 kids from all 50 states and sundry countries was televised live during primetime.

The Spanish-language bee will begin more modestly, with about 11 participants, grades four through eight, from five states. It is the culmination of state Spanish spelling competitions held earlier this year.

The competition begins at 10 a.m. Saturday.