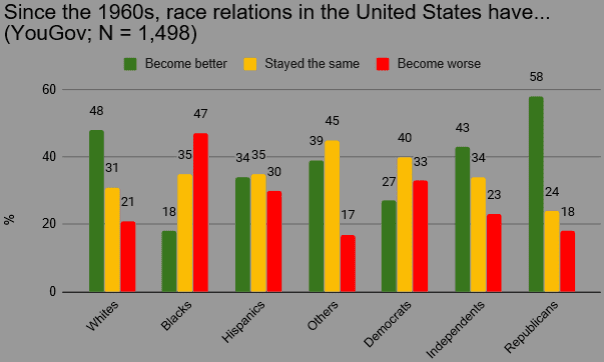 More than fifty years after the civil rights revolution and opening the country up to immigration from all over the world, we have a progress report on how citizens of the empire think things are going. In short, not particularly well: Among no racial group does a majority perceive American race relations to have improved over the last five decades. It is only among whites that a plurality even feel that way. Nearly half of blacks view things as having gotten worse since Selma and the death of Martin Luther King.

A modest majority of Republicans do think relations between the races have improved over the last half of a century. To affirm this, they want people of all colors and creeds to stand for the national anthem. As American patriots, we all bleed red, white, and blue!

Expressing that attitude is on the way to becoming a hate crime, as New Orleans Saints’ quarterback Drew Brees recently discovered. The modest majority of Republicans who think things have improved will soon become a silent minority even among conservatives if they know what’s good for them.