Ferguson, Missouri: Still The Biggest Story in the World

The top left, most featured story on NYTimes.com: 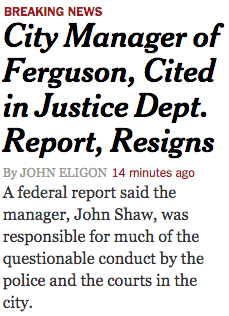 How many people understand that all this is just spite?

The Administration and the national media humiliated themselves over their Gentle Giant story. That they had gotten the facts backward was apparent by 8/18/2014, by which point the convenience store video and the private autopsy results were public knowledge. But they didn’t back off because they wanted to ride the Narrative to victory in the November elections.

So now they are just indulging in displays of Megaphone Power by acting like speed traps are massively important and vindicating for them.

Has anybody in the Obama Administration or the press been fired over this fiasco?