Ferguson: Holder Is Shocked, Shocked to Find in World's Most Important Place a Unique Pattern of Blacks Behaving Badly; Whites at Fault 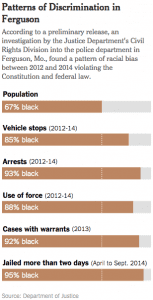 WASHINGTON — Police officers in Ferguson, Mo., have routinely violated the constitutional rights of the city’s black residents, the Justice Department has concluded in a scathing report that accuses the officers of using excessive force and making unjustified traffic stops for years.

The Justice Department, which opened its investigation after a white Ferguson police officer shot and killed a black teenager last summer, says the discrimination was fueled in part by racial stereotypes held by city officials. Investigators say the officials made racist jokes about blacks on their city email accounts.

Ferguson is a largely black city with a government and a police force that are mostly white. After the shooting of the teenager, Michael Brown, the city erupted in angry, sometimes violent protests and looting. Since then, Ferguson has been at the center of a national debate over race and policing that has drawn in President Obama, Attorney General Eric H. Holder Jr. and the F.B.I. director, James B. Comey. 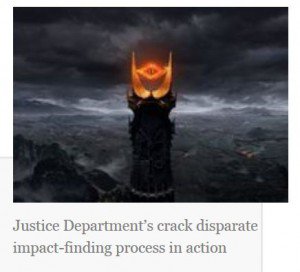 Note that the Obama Administration could conduct the exact same show trial of any town in America that displeases and produce a similar graph.

Ferguson officials now face the choice of either negotiating a settlement with the Justice Department or potentially being sued by it on charges of violating the Constitution.

In compiling the report, federal investigators conducted hundreds of interviews, reviewed 35,000 pages of police records and analyzed race data compiled for every police stop. They concluded that, over the past two years, African-Americans — who make up about two-thirds of the city’s population — accounted for 85 percent of traffic stops, 90 percent of citations, 93 percent of arrests and 88 percent of cases in which the police used force.

And how does this pattern differ from any other place in America? Can the Justice Department find just two municipalities in America where blacks don’t get in trouble with the law disproportionate to their share of the population? There might be one town somewhere in America where that isn’t true, although I’ve never heard of it, but are there two?

In particular, note that the white population of Ferguson is largely older homeowners, the kind of people who don’t get themselves in trouble with the police. This was due to the relative amicability of race relations in Ferguson before the Eye of Sauron turned its attention on that place. For decades, blacks had been choosing to move to white-dominated Ferguson (while fleeing black-ruled places like East St. Louis. But in the past, the black newcomers had tended to be respectable people, often looking to get away from black slums. Older white empty nesters typically stayed but their children would choose other places with “better schools” as Ferguson’s local schools became black dominated.

The findings reinforce what the city’s African-American residents have been saying publicly for the past year: that years of discrimination and mistrust created the volatile environment that erupted after Mr. Brown’s shooting.

In other words, this graph justifies the two rounds of undocumented shopping.