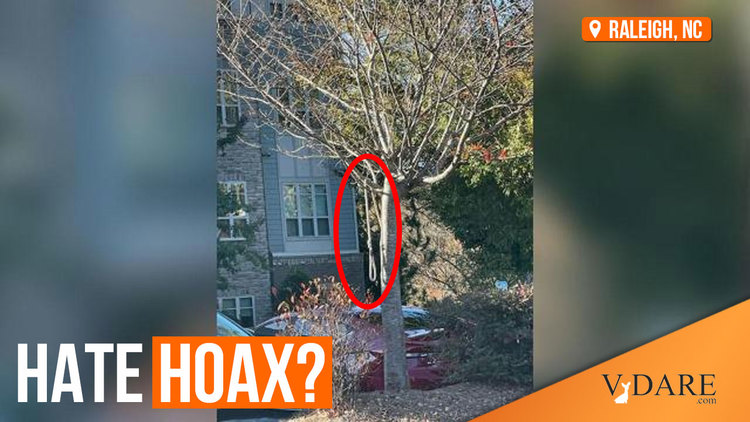 From WRAL News in Raleigh: A woman walking her dogs Sunday spotted what appeared to be a noose hanging from a tree in her northeast Raleigh apartment complex.

RALEIGH, N.C. — A woman walking her dogs Sunday spotted what appeared to be a noose hanging from a tree in her northeast Raleigh apartment complex.

Residents who live in the Courtland East Midtown apartments off Six Forks Road told WRAL News they were shocked, disgusted and worried about their safety after seeing the rope.

“It was very uncomfortable to begin with, especially in this day in age,” one resident told WRAL News. “We immediately emailed them let them know how we were feeling and asked them what they could do to make us feel more comfortable and safe in our neighborhood. We got a very tone deaf response.”

Residents reported seeing the rope in a tree on Sunday, and it wasn’t removed until after 9 a.m. on Monday.

A staff member from the apartment’s office told WRAL News a member of the maintenance team removed the rope from the tree and discovered it was a dog leash.

Multiple neighbors thought it was a noose.

“That may have been triggering for some people in the community because it wasn’t that long ago here in our country, especially in the South, where … that was used to intimidate people of color,” said Gerald Givens, president of the Raleigh-Apex NAACP.

“That’s why it’s important that … we’re cognizant of our behavior and our reactions to things and that we do as much as we possibly can to be considerate of others.”

A member of the apartment staff suggested, “I am thinking somebody left it in the parking lot and a neighborly person put in on a branch so the rightful owner would see it.”

It’s important to note that not all ridiculous hate crime whoop-tee-doos involving perceived nooses are actual Hate Hoaxes perpetrated knowingly to gin up anti-white fear and loathing. Many fall into the broad category of Hate Hysteria among people whose terror and hate for whites have already been stoked by the media so they make derisible mistakes, such as mistaking a dog leash for a lynching noose, without anybody intending the dog leash to provoke that reaction.