Late Friday afternoon, CBS News posted the following tweet, which I re-posted at this blog.

JUST IN: Judge in the trial of Michael Slager, officer who shot and killed Walter Scott, asks for undecided juror to be replaced.

The CBS Evening News tweet did not link to any story. This tweet is now gone—see Archve.is of Google Cache here.

I then came across one or two stories elsewhere about a juror who “refused to deliberate.”

In the meantime, I found stories at CNN and NBC News, reporting that there was no “undecided” juror. Rather, there was a white man juror who was the lone refusenik who voted to acquit Michael Slager, and who told his colleagues that he was not going to change his mind, even after the judge ordered the jury to continue deliberating, I believe, three separate times.

In that context, “refuses to deliberate” would be a case of someone lying about the white man juror, and defining anyone in his way as “refusing to deliberate,” in an effort to get that juror thrown off the jury, in order to guarantee the railroading of Michael Slager.

Granted, I’m using my b.s. detector to decide between mutually incompatible stories, many of which keep disappearing! 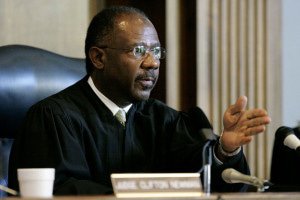 Sometime tonight, between 12:30 and 1:00 a.m., I found a “correction” tweet on CBS News’ Twitter feed. The correction stated that it had not been [black] Judge Clifton Newman who had had an issue with the white man juror, and the juror had not been tossed. Rather, it was the [black] foreman, who had asked Judge Newman to toss the lone, white holdout.

Well, minutes after I found the correction it, too, disappeared into the ether. I tried in vain, to find it on CBS News’ Twitter feed, but CBS's censor had sent it, too, down the memory hole.

Finally, I found the feed of T.J. Holmes, a black ABC News reporter:

I have frequently written of how the system of affirmative action/“diversity”/Jim Snow causes cascading failures.

A racist black man gets appointed, via affirmative action, or chosen by the local Democratic machine to be a judge. There goes your court system. Barack Obama  and his henchmen declare war on white policemen, and dedicated public servants like Michael Slager find themselves in handcuffs and shackles, based on radical new interpretations of the law.

A racist black judge names a racist black man, the only black on a 12-man jury, jury foreman, and the latter seeks to rig a murder trial, by asking his “brother,” the judge, to toss the one dissenting juror off the panel, so as to complete the racist farce.

The trial should have been declared a mistrial, but “the jury” (i.e., the racist, black foreman) has repeatedly fought the idea.

The jury will return on Monday at 9 a.m., to deliberate, so that the foreman can continue trying to intimidate, with the help of the other jurors, the holdout into submitting.

The trial appears to be rife with grounds for reversal, in the event of a conviction, but given that it is the current year, one cannot assume that any of those grounds will carry the day.