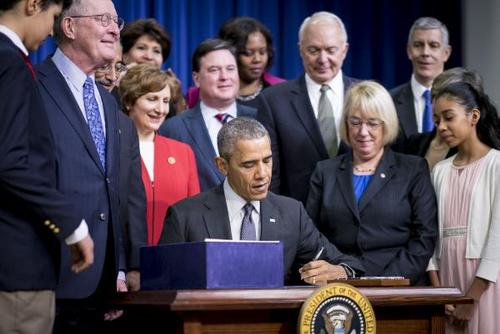 Early in the 21st Century, noted education experts Ted Kennedy and George W. Bush got together to push through Congress the bipartisan No Child Left Behind act mandating that 100% of American public school students be above average by last year.

As luck would have it, that didn’t actually happen.

But now Obama has just signed a new bipartisan bill to replace No Child Left Behind, the even more implausibly entitled Every Student Succeeds act.

I feel we are making this much harder than necessary. If we could just increase the minimum Harvard class-size to 4 million students, then we could ensure that every American student reaches the pinnacle of academic success. There, problem solved.

Even without counting any additional tuition and relying just on the endowment, that leaves Harvard about $9,000 per student, which is certainly doable.

The next obvious step would be to increase the Harvard class-size to 100 million, so we could ensure that all children everywhere succeed. Remember, it’s “every child succeeds”, not “every American child succeeds”. We just need to get the Harvard endowment up from $36 billion to $910 billion. But after they start graduating 4 million high-achieving alumni each year, that should not be a problem.

Harvard won’t have a problem with this, right?